Winnipeg Free Press:  The year of the Jets.  Gary brings the year to a close with the Top 10 moments of the Winnipeg sports scene.  Not surprisingly 7 of the 10 are related to the Jets.

Winnipeg Free Press:  Shutout saves beards life.  Mason might have some time to let that beard grow as he doesn’t generally see a lot of action with Ondrej Pavelec getting the majority of starts.  However the Jets play a back-to-back to begin the new year in Toronto and Montreal so the beard will be tested then most likely. 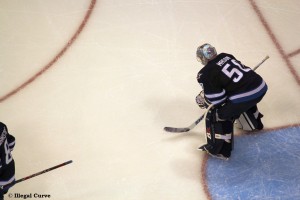 Winnipeg Free Press:  2011 a year of upheaval for players.  As Jim Slater said yesterday, while he never anticipated the move to Winnipeg it has been one of the best things that has happened to him in his career.  Many other players share a similar sentiment.

Globe and Mail:  Harold Ballard’s ghost still haunts Winnipeg.  Perhaps this is why we have a chip on our shoulders when it comes to our fellow citizens from the centre of the universe (although ironically the actual longitudinal center of Canada is in Manitoba).

Winnipeg Sun:  A true hockey town.  A nice rehash of how far we have come as a city, in quite a short period of time. This time last year as we were getting set to ring in 2011, the city still had no idea that in one year’s time, we would be talking the Jets making the playoffs and it would involve a conversation discussing a team in the present, not past, tense.

Winnipeg Sun:  Jets going out with a bang.  It is going to be quite the clash when these two teams with identical records take to the ice at 6 pm to help end one of the most memorable year’s in Manitoba sports history.

Winnipeg Sun:  Crazy “Peg fans fuel Jets.  The fans have made each and every game at the MTS Centre an experience throughout this season.  Whether it was the cheer-boo-cheer of the Selanne/Anaheim game or the constant applause from the 1st exhibition game, it has been a season to remember.

Winnipeg Sun:  Jets highlight reel.  The relationship between the city and the Jets isn’t simply an outpouring of love from the fans without reciprocation.  Most of the players have been quite effusive in their praise of the city.

Toronto Star:  High-energy launch fuels Jets playoff hopes.  The euphoria of the Jets return has been replaced with expectation.  Namely, that the team has playoff aspirations.

Winnipeg Sun:  Jets will make playoffs says psychic.  Looks like we will be able to test her predictions sooner rather than later.  If there are set of twins born to start off the new year, it means fans had better get their whiteout shirts ready.

The Telegram:  And then there were two.  The trifecta of goalies has been concluded and it appears that Peter Mannino has drawn the short straw.

The Telegram:  The year in sports.  Some of the top moments that the folks over on the East Coast have experienced and is isn’t surprising what their #1 choice was.

Toronto Star:  Homeboy Reimer comes ‘full circle’ with start against Jets.  Fans chose not to boo Kenora’s Mike Richards on Thursday although they have shown a penchant for jumping on the visiting team’s goalie.  It will be interesting to see what happens with Manitoba native James Reimer takes to the ice tonight.

Toronto Star:  Arrival of Leaf twins big event in ‘Peg.  The Jets are riding a two game winning streak and with both teams having identical records this is a critical game to end 2011.

Toronto Star:  Leafs’ penalty kill need to build confidence.  If they are looking for a boost, Winnipeg is not the place to get it started.  Not because the Jets 16th ranked PP is something to instill fear in the opposition, but mostly because the Jets are 27th overall in power play opportunities.