Red-hot Cormier recalled to Winnipeg. New task ahead for team. False parity keeps most teams in playoff hunt. Shut out in the shootout. Little big man. Sports story of the year? Its gotta be the Jets. Creating the spectacle for Winnipeg Jets home games.

Note:  As per usual, stay tuned to Illegal Curve as we will be at the MTS Centre for practice and will be speaking with the players on their expectations for the Kings game tonight.  Since the Kings played last night in Chicago, they will likely not have a game day skate.

Winnipeg Free Press:  Red-hot Cormier recalled to Winnipeg.  This is the time for him to seize the opportunity. He has been extremely good for the IceCaps so perhaps, given the chance, he can continue his hot streak in the NHL. 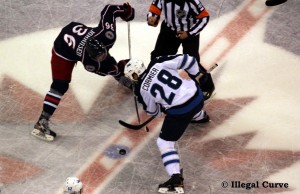 Winnipeg Free Press:  New task ahead for team.  This isn’t the same Atlanta Thrashers team that faltered mid way through the season.  They have had another year to grow together and bond as a team.  I’m not suggesting that history won’t repeat itself, but this is a new year, a new team in a new city with entirely new possibilities on how the season will conclude.

Winnipeg Free Press:  False parity keeps most teams in playoff hunt.  While I would agree it is premature to begin to manufacture White Out shirts just yet, this team is playing extremely well together.  If they can maintain their consistency and finish as strong in January as they have in December, there is good reason to believe that final game against the Lightning in April will have some significance.

Winnipeg Sun: Shut out in the shootout.  The Jets haven’t had an overabundance of shootout opportunities this season and do have some shooters that have a decent shootout percentage.  The 3 point games can cause some consternation though, as you watch your rivals gain points in a loss. 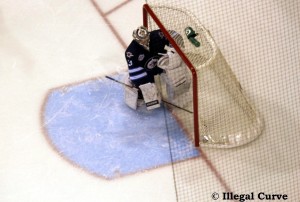 Winnipeg Sun:  Little big man.  I’ve had a number of people tell me recently that they really enjoy the game he plays.  More and more people are seeing what Tim Stapleton has brought to the Jets all season long.  He has speed, good hockey sense, the ability to play the point on the power play and to be responsible when he see’s the defenceman are pinching.  All things Coach Noel can appreciate.

Winnipeg Sun:  Sports story of the year? Its gotta be the Jets.  No question about it.  We might have some bias but this feels like the best sports story, not simply a hockey story, of the year.

CBC:  Creating the spectacle for Winnipeg Jets home games.  Our own Michael Remis also covered this topic in a post entitled ‘Behind the Music‘.  It is quite the fascinating job and both articles are worthwhile reads.

TSN:  IceCaps score three quick goals to beat Bulldogs.  The unorthodox trifecta in net continues to work as David Aebischer got his 7th win of the season and the IceCaps continue to be the hottest road team in the AHL.

Winnipeg Free Press:  Loving life on the Rock, speedy Albert on Jets radar.  It isn’t always flash that will get you notice in the AHL.  The high praise of coach Keith McCambridge who suggest that he could be a solid 3rd or 4th line NHLer should have the brass paying close attention.

LA Times:  Quick gets 5th shutout as Kings beat Hawks 2-0.  Hawks coach wasn’t pleased with the goals that were scored against his team.

Calgary Herald:  Canadians solve Mrazek puzzle.  Jets first round pick Mark Scheifele, who started off the game with some excellent heads up play, had 2 goals in the 3rd period which helped break open a relatively tight game with the Czech team.  To hear him talk about his game, click this link to a TSN video clip.

TSN:  Canada’s victory started in goal with Wedgewood.  While he may not have been named player of the game, the fans were chanting his name once the final buzzer sounded.