Winnipeg Free Press:  Slow, steady wins race, eventually.  As we talked about on air, the Jets are building for the future and despite the current success we don’t expect any parades down Portage & Main just yet.

Winnipeg Free Press:  Sky-high in Colorado.  The Jets are finally in the post-season!!  Of course they have a long way to go still and  a heavy road schedule in January will really make or break their season. 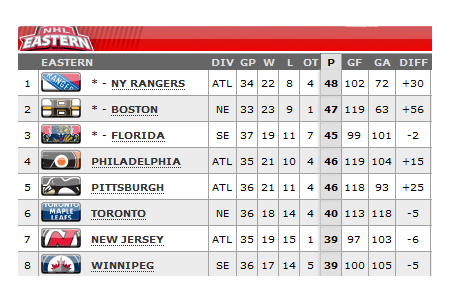 Winnipeg Sun:  Jets road scholars.  While one road victory against a team playing the 2nd game of a back-to-back does not exactly make the Jets road warriors just yet, they played an excellent road game last night.  With 9 road games in January they are going to have to continue this type of play for most of the month of January.

Winnipeg Sun:  Jets defence makes its case.  They have been simply sensational.  While the goaltending of Ondrej Pavelec has been great, the Jets defence continues to excel, especially when you consider all the substitutions that have been made throughout the season.  Last night, a late scratch of Big Buff, saw Mark Flood who has been excellent in almost every game he has played while wearing a Jets uniform, come into the game and perform extremely well considering he hasn’t seen game action in 4 games.

Denver Post:  Avalanche’s record win streak blown away by Jets steam.  As I said on twitter last night, the Jets are streak busters this season.  They have now ended big winning streaks of Boston, Minnesota and Colorado.

National Post:  The return of the Winnipeg Jets helps the NHL rediscover Canada.  Manitobans might be sad to see the year 2011 come to a conclusion this week.  This has been a banner year for the province as the city of Winnipeg and Province of Manitoba has regained some national standing that many felt was lost back in 1996 when the Jets 1.0 departed for Arizona.

Illegal Curve:  Jets on a Deadline.  All the recaps, video highlights and the NHL.com 3 Stars of the Night.

VOCM:  IceCaps back on the ice.  Can the Jets affiliate continue to dominate on the road?  They are back in action and hoping to continue the hot streak they have been on all season long.

SN590:  Forward Simon Gagne not traveling with team.  Not surprisingly the Kings won’t disclose his injury but he won’t be on the trip to face Chicago or Winnipeg.

Los Angeles Times:  Kings at Hawks.  True North should have sent the Hawks a nice Christmas present as a number of teams have had to pass through the Windy City before they reach Winnipeg.  Playing in Chicago is never easy and the Jets have benefited big time playing teams who have just played the always tough Blackhawks.