Note:  We will be taking over the Big Show which is being re-dubbed the Illegal Curve Morning Show all week long starting today from 6-9 am cst.  Tune in to TSN Radio 1290 to listen.

Winnipeg Free Press:  Little’s foot injury giving Burmistrov opportunity.   I was expecting coach Noel to use the ‘day-to-day’ phrase when asked about Little’s status but instead he gave an “I wish I could say day-to-day” which likely means the Jets center won’t be a player for a few more games.

Winnipeg Free Press:  Hoping to fly in thin air.  Playing in Denver requires some extra stamina to deal with the altitude in the mountains.

Winnipeg Sun:  Jets battling road bugaboo.  The Jets are going to have to learn quickly how to be road warriors.  They play 1 of the next 3 on the road to close out December but then play 4 at home and 9 on the road in January.

Winnipeg Sun:  Jets, Avs seem likely to go with short shifts.  The Jets might want to emulate whatever the Avalanche have been doing at the Pepsi Center, as they have won 8 in a row at home.  Despite a victory in Minnesota last night, the Jets have shown that they are pretty good at beating teams that are playing the 2nd game of a back-to-back.

Winnipeg Free Press:  Lots of NHLers cut their teeth at WJC.  We had  the audio on the Illegal Curve Morning Show and you can listen here.

Winnipeg Free Press:  Give retailers five for fighting.  Now, now children there is enough Jets gear to go around.

Denver Post:  Avalanche wins 4-2 at Minnesota.  Since the Avs started Varlamov on Monday, it looks like the Jets will be getting “Giggy” with it.

Denver Post:  Avalanche will be seeing less of Wild starting next season.  It is going to be quite the season next year.

Edmonton Journal:  Canadian ‘flag mark’ may soon be all the rage with hockey fans.  Would you wear one?  Makes it a lot easier to show your passion without the hours of face painting. 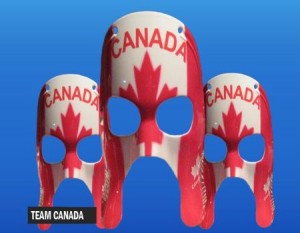 Edmonton Sun:  Canada pumps up Edmonton.  If it wasn’t Team Canada, you would think they were discussing the impact the fans at the MTS Centre have on the Winnipeg Jets.  Canadiens love the World Juniors and Edmonton and Calgary will likely set new records this year.

Calgary Herald:  Canada’s adoration for World Juniors began in 1982.  Is anyone surprised with the Canadian city being credited as being the tipping point in making this tournament what it is today?

Globe and Mail:  Hats off to Team Canada, goalie Mark Visentin.  It is always important to get off to a good start but these early games don’t necessarily mean you are going to be playing for gold.