Note:  The Jets have re-assigned Jason Jaffray to IceCaps after 13 games with the parent club.

Winnipeg Free Press:  Big picture becoming clearer.  As the Jets have proven in December (6 wins 2 losses) they sure like they’re home cooking.  Most games have been won either by 1 or 2 goals in the favour of the home squad. 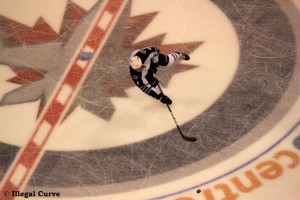 Winnipeg Free Press:  No sooner than Antro, Enstrom and Burmi get back, Little lost.  Just when it looked like the Jets were going to have a healthy team, an Oduya slapper has sent Little to the “day to day” category.  This is especially unfortunate given his chemistry with Kane and Wheeler.

Winnipeg Free Press:  Finnish Flash a living legend.  To hear Selanne use playing in Winnipeg and Helsinki as two of the biggest moments in his storied hockey career is significant.  Considering he has won the Stanley Cup, silver in the Olympics and has so many other hockey memories to draw from, yet to see how much value he places on the connection to these cities and the people that make that connection so special, is just one (of many) ways to cement Teemu as a legend.

Winnipeg Sun:  Back to reality for Jets.  Time to leave the fun and games of the Teemu weekend in our collective memory banks and move on.  The Jets need to continue this strong home stand (currently 6 wins 1 loss).  They will also need to figure out how to become better road warriors as they play 9 of 13 January games away from the friendly confines of the MTS Centre.

Winnipeg Sun:  Ducks in awe of Jets fans.  After Saturday night’s extravaganza, how could you not be.  I’ve witnessed every Jets game this season and that set the level to one I think will only be matched by a Jets post-season appearance (complete with whiteout).

Globe and Mail:  Teemu Selanne still basking in afterglow.  With the way the Ducks season is going it might be the last pleasant hockey memory for the Finnish Flash this season.

The Telegram:  Caps in better cheer heading into holidays.  The Jets could learn a thing or two about become road warriors like the farm club.  The Caps are 10-0-3 away from Mile One Centre and continued that hot streak with a victory over the Pirates.  Nice to see prospect Carl Klingberg return to his scoring ways and Patrice Cormier remains hot, netting a pair.