Game Recap – Jets 5 Ducks 3: We cover every aspect of last night’s game. From the Selanne news conference to our post-game podcast and audio from both teams.

Winnipeg Free Press:  Mason a proven stand-in winner.  He has been excellent when called upon, especially since he often goes quite a bit of time between starts.  His practice worth ethic is fantastic and this allows him to play as well as he does when he is called upon.

Winnipeg Free Press: Teeming with love for Teemu.  From fans in the stands of the MTS Centre to people on the street, their is no question how this city feels about him.

Winnipeg Free Press:  Crowd makes Selanne first star despite Ducks’ loss.   That will easily go down as one of the most unique 1st periods in NHL history.  The crowd did an EXCELLENT job saluting Teemu while still showing the home team the proper level of support.  There was one shift in the Jets zone (either Selanne’s 2nd or 3rd shift on the ice) when the fans booed and cheered while the puck was in the Jets zone and the Jets couldn’t didn’t have possession of the puck.  Later in the period when Anaheim scored and goal scorer Corey Perry was booed, Selanne was cheered when he received the primary assist.  It was truly a unique night of hockey. 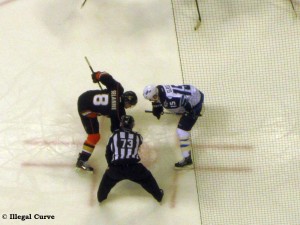 Winnipeg Sun:  Selanne’s sweet sendoff.   They’d still be cheering if he had donned an old school Jets jersey and skated around the ice when he was announced as the 3rd star (similar to Mike Modano wearing a North Stars jersey in St. Paul a few years back).

Illegal Curve: Postgame Podcast. Host Drew Mindell & analyst Richard Pollock recap all of the nights events, including the welcome back to Teemu Selanne and provide analysis on the hockey game that was played.

Post-game: Teemu Selanne press conference. Teemu spoke for 9 minutes following his team’s 5-3 loss to the Jets. He spoke about what the night meant to him, his reaction to the reception by the fans and all the emotions associated with a return to Winnipeg.

Newsday:  Islanders beat Wild 2-1 in shootout.  The Jets have a few days between games but they need to come back down to earth as they face a fellow Eastern conference team.  The Islanders, who beat the Wild last night in St. Paul, also don’t play again untill they face off against Winnipeg.