Note:  The Moose are certainly ending the 2015-16 season with a bang.  In the second last game of the year last night in San Antonio the team went down 2-0 to the Rampage before they exploded for five straight goals, which was capped by a Jimmy Lodge natural hat trick (which also happened to be his first three AHL goals).  2015 2nd rounder Jansen Harkins who is on an ATO also scored his first goal in the AHL.

Winnipeg Free Press:  Where the Jets are headed: Q and A with Mark Chipman.  Tim goes one on one with the Jets co-owner in this Q & A which covers a little bit of everything including the end of the honeymoon phase to empty seats to the direction of the team and quite a bit more. 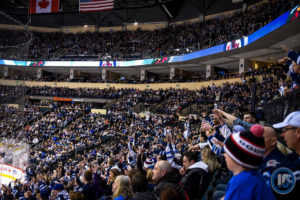 Winnipeg Sun:  What’s wrong, right with each Canadian NHL team.  Clearly not a Jets specific article but Winnipeg does get a look at in this article dealing with the woe being felt in Canada as they playoffs are sans any Canadian content.  Article gives you a Glass half full, Glass half empty, Quote/Unquote and a prognosis.

MB official site:  Lodge’s hat trick leads Moose to victory.  He went his first 42 games this season without recording an AHL goal.  Then in game 43 he decided to rip off three straight for the natural hat trick.

Sanantonio.com:  Rampage season ends with home loss to Moose.  According to Chris White the Moose are now 14-14-1-1 since the beginning of February.

Illegal Curve:  Josh Morrissey didn’t travel to Texas; won’t play in final two Moose games.  Similar to the situation with Bryan Little it made little sense to rush Morrissey back just to play a game or two.  It had to be disappointing for him to be injured as he likely would have had an extended look with the Jets due to injuries that happened to defenceman with the parent club.