Sports story of the Year – Rebirth of the Winnipeg Jets. UND’s Canadian experiment. Better attitude and return to basics. From hurt to high speed. Bogosian avoids suspension, and here’s why. Ladd hopes Scheifele learns to be a leader. New hand Miettinen not ready for Caps. Noel a master juggler. No fanfare from Jets for Selanne. Bryan Little coming up big for Jets. Jets licence plates still available in Portage.

Selanne Watch: No fanfare from Jets for Teemu. Return to Winnipeg sparks nostalgia.

Next opponent news – Washington Capitals: It’s not the system, its’ the effort. Capitals have a goalie problem, but there is no quick fix. We’ve seen this lifeless look from the Capitals.

Note:  Stay tuned to Illegal Curve all day as we will have post-practice audio from the Jets and Capitals.

CBC:  Sports story of the Year – Rebirth of the Winnipeg Jets.  I absolutely agree that this is the sports story of the year.  Could have done without this comment in the Afterword; “Questions persist about the long-term viability of Winnipeg as an NHL market”.  If this story is about reflecting on the year past, why are we looking into the future?

Winnipeg Free Press:  UND’s Canadian experiment.  If you haven’t been to a college hockey game you’ve missed out.  They are a lot of fun and I suspect that Winnipegger’s will show the NCAA that we support hockey in any form.  I had the opportunity to meet Fighting Sioux head coach Dave Hakstol at the Wild game on Tuesday.  Extremely nice guy with a ton of hockey knowledge.

Winnipeg Free Press:  Better attitude and return to basics.  It is like any skill one possesses.  Even if you have an innate ability, sometimes it just doesn’t work for you.  Bryan Little has gone back to the basics and it is clearly working for him.  He has 17 points (11 g, 6 assists) in his last 16 games.

Winnipeg Free Press:  Bogosian avoids suspension, and here’s why.  After scoring his first goal of the season, Jets fans are hoping there is more of that to come.  Of course had he been suspended all the other intangibles he brings to the game (and there are many) would have been stuck wasting away in the press box.  Should he have been suspended for the hit in your opinion? 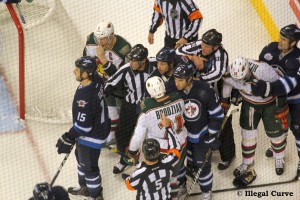 Winnipeg Free Press:  From hurt to high speed.  The Jets pressed Hainsey back into service on Tuesday although he “only” played 15 minutes (as opposed to the 22 minutes he played when he first came back against Washington).  Assuming he can stay healthy his veteran presence will be a huge boon for the Jets to maintain this momentum.

Winnipeg Sun:  Ladd hopes Scheifele learns to be a leader.  Which is the bigger stage?  The World Juniors or playing in the first few Jets games as they returned to the NHL?  Either way, Scheifele handles these challenges with an excellent attitude and continues to show the Jets were smart to select him where they did.

Winnipeg Free Press:  New hand Miettinen not ready for Caps.  Not much of a surprise.  Looks like he could first suit up for the Jets against his fellow Finnish countryman on Saturday night.

Winnipeg Sun:  Noel a master juggler.  He has been forced to constantly tinker with the lines but the Jets bench boss has done a more than admirable job getting the most out of the players he has available on a day to day basis.

NHL.com:  Bryan Little coming up big for Jets.  The change in his level of play since the beginning of the season to now is quite easy to see.  He has points in 7 consecutive games and his confidence on the ice, combined with his speed has made the Kane/Little/Wheeler line a threat to score every time they are on the ice. 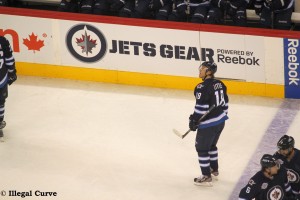 Portage Daily Graphic:  Jets licence plates still available in Portage.  If you got shut out in Winnipeg head on down to Portage La Prairie to pick up your Jets license plate.

Winnipeg Sun:  No fanfare from Jets for Teemu.  While it is easy to understand the decision by True North on an intellectual level, if you think emotionally (as most fans do when it comes to the Finnish Flash), it is a mistake to treat him like we would any other former player for the Jets 1.0.  Of course, perhaps it is better that the response to Teemu’s return is going to be directed by the people most connected to him and the reason he is connected to the city, the fans.  Expect a GIANT standing ovation when he gets his announcement from Jay Richardson during the game.

FS West:  Teemu’s return to Winnipeg sparks nostalgia.  Teemu said during his conference call that he hopes the fans don’t boo him.  While the other team’s star players have been the recipients of the MTS Centre fans ire, I think the Finnish Flash will be getting a pass on Saturday night.

CSN Washington:  It’s not the system, its’ the effort.  A team that was expected to compete for the spot as 1st overall in the  Eastern Conference is barely holding its head above water.  If the team cannot right this ship, you know that GM George McPhee won’t be firing Dale Hunter.  Instead we might see some player movement to light a fire under his troops.

Washington Post:  Capitals have a goalie problem, but there is no quick fix.  Perhaps the Florida Panthers knew what they were doing when they let him get away.  Of course the problems in Washington certainly cannot all be laid at the feet of Tomas Vokoun, but his play has been less than stellar this season.

Washington Times:  We’ve seen this lifeless look from the Capitals.  When it was revealed that Mike Green wouldn’t be playing, I said Jets fans should be happy that the offensive force on the backend for the Caps won’t be on the ice at the MTS Centre.  Further to that point, when he plays, the Caps are 8-0.  Without him they are 7-13-1.