Next opponent news – Anaheim Ducks: Up next for Ducks – Friday at Chicago.

Winnipeg Free Press:  Ovie, Capitals burn cute Jets.  Coach Noel has a right to be mad.  It wasn’t just the game winning goal that should lead to his outrage.  The team did not play within his system for almost the entire evening. 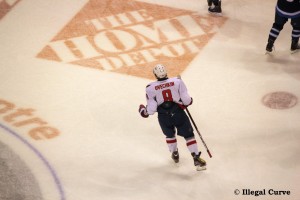 Winnipeg Free Press:  Fans appreciate what G-S-T brings to Jets.  It was evident again last night as chants of GST broke out each time the guys were on the ice.  They want to face the top lines each night and it is a thing of pride to shut them down.  They wanted to face the Ovechkin line before last night’s game and they kept the Russian star quiet almost the entire game.  They were not on the ice for his game winning goal with just over a minute to play in the 3rd.

Winnipeg Free Press:  Chevy needs to add affordable horsepower.  Perhaps they could pry this ageless Finn from the Anaheim Ducks for a playoff run……

Winnipeg Sun:  Enstrom return brings dilemma.  The Jets certainly don’t want to expose Mark Flood to waivers as there is a good chance they could lose the defenceman who has played so well for the team since his call-up from the IceCaps.  We spoke with Mark yesterday and here is that audio about how the return of injured players affects his play.

Winnipeg Sun:  Sweet smell of success.  It is clearly about keeping this team loose and Big Buff is a big proponent of that.  He told the media yesterday that it is important to celebrate any goal (nice or not) like it means something.

Winnipeg Sun:  Rappers light up some Jet Fuel.  As with anything Winnipeg Jets related I’m not surprised that the song is rising up the local charts.

CBC:  Jets humbled with CBC Sports story of the year.  Coach Noel was quite pleased during his press conference that this was the sports story (not limited to just a hockey story) of the year as should be most fans of the Winnipeg Jets.

StarTribune:  We need Jets-Wild to become rivalry.  Shall be very interesting to see what the February 13th re-match in St.Paul, Minnesota produces.

The Telegram:  IceCaps reach for the top in Manchester.  The Caps have been sliding of late and could really use a win, but will be in tough against this Manchester team undefeated in regulation in last 6 games (5-0-1).

CBC:  The Finnish Flash returns to Winnipeg.  Thirteen things to know about one of the most memorable Jets of all time.

Orange County Register:  ‘Friendly Manitoba’ awaits Ducks Selanne.  As I have been saying all season, this is easily the most anticipated game (at least it is for me) of the year.

the Score:  Teemu’s return.  Trust me, Teemu will not be booed.

Los Angeles Times:  Up next for Ducks – Friday at Chicago.  Good news for Jets fans nursing their wounds after the 1-0 Jets loss, is the Ducks have to face a hot Hawks team at the United Center before they arrive in Winnipeg.