Note:  The Moose road trip mercifully came to a conclusion with a 4-0 loss to the Ontario Reign last night.  They now some time off for the AHL All-Star break until they return to action on February 4th to take on the Toronto Marlies at the MTS Centre.

Winnipeg Free Press:  Big Buff didn’t hit a high note with his shot, but he’s having a great time in Music City.  (Paywall).  Somewhat surprisingly he couldn’t crack the 100 MPH mark but doesn’t sound like it has impeded his enjoyment in Nashville. 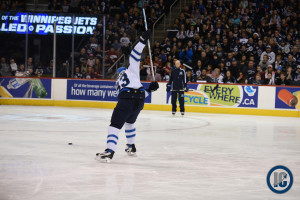 Winnipeg Sun:  Dilemma of Andrew Ladd’s future with Jets lingers.  Ken offers his insight into the situation and also delves into who he could see as a potential trade partner if that is the route this ends up going down.

USA Today:  Dustin Byfuglien talks future; plus three trade fits if he leaves Jets.  Not a surprise that all three potential teams are in the East.

Press-Enterprise:  Mersch’s two goals help lead the Reign past the Moose.  This Manitoba team returns back to Manitoba licking their wounds and trying to figure out where it all went wrong.

College Hockey News:  Appleton slips under U.S. radar, but is breaking out for Spartans.  Good read on the Jets 2015 6th round pick.

Topics: Jets Playoff Chances at The All Star Break, Do The Jets Spend Too Much Money on Defense, Jets Over/Under for remainder of season, Trade Talk Around the NHL, Dennis Wideman incident