Winnipeg becoming a tough out. Mason has the measure of the Hurricanes. No slacking off. We might see Nik tonight. Jesus of the prairies. Kane has contract on mind. Thorburn can see humour in goal drought. Inner-city kids get a taste of big-time hockey. Jets analyst recalls playing for predator.

ESPN:  Winnipeg becoming a tough out.   People around the league are talking about how loud and tough the MTS Centre is and Winnipeg has quickly gained quite the reputation around the league.  (requires being an ESPN Insider to read full article).

Winnipeg Free Press:  Mason has the measure of the Hurricanes.   Sometimes a player just excels against a team and in this case, Mason is already 2-0 against the Canes this season, so perhaps coach Noel is playing more than a hunch by starting his veteran backup.

Winnipeg Free Press:  No slacking off.   The Oilers learned a valuable lesson when you underestimate a team, being on the receiving end of a 5-3 loss to Carolina on Wednesday night.  The Jets have practiced hard the last couple of days and coach Noel wants to see that same enthusiasm and effort brought to the MTS Centre on Friday night.

Winnipeg Free Press:  We might see Nik tonight.  From the sounds of it, so does Kyle Wellwood, who said yesterday that he would like to have the opportunity to regain the good chemistry he had with the big centre.

Macleans:  Jesus of the prairies.  I’m all for hyperbole……and while you have to admire the efforts by True North’s Chairman Mark Chipman, this seems a bit much.


Winnipeg Sun:  Kane has contract on mind.  How could you not?  He is lighting it up just at the right time and has to hear ‘cha ching’ every time the goal goes in the net. 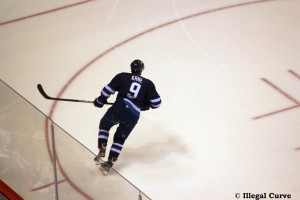 Winnipeg Sun:  Thorburn can see humour in goal drought.  Always quick to make a joke, he came close to breaking out of his slump in the 2nd period against Boston when he flipped the puck on net from practically behind the goal, and if not for the quick foot work of Tuukka Rask, he may have scored.  However Friesen hits Thorburn’s worth on the head with this line:

It’s easy to see what part of the GST line, with Glass and Jim Slater, Thorburn makes up: the taxing part.

Winnipeg Free Press:  Inner-city kids get a taste of big-time hockey.  Another example of the Jets players giving their time to the community, in this instance, helping out inner-city kids playing in a tournament at the IcePlex.

Winnipeg Sun:  Jets analyst recalls playing for predator.  It took the courage of players like Theo Fleury and Sheldon Kennedy to stand up and shine the spotlight on this issue for it to get some notice in the hockey world.

The Telegram:  Calling St. John’s home…for now.   Ben Maxwell has bounced around a lot of late (7 teams in past 20 months) and it would be nice for the Vancouver native to have a little consistency in his life.

AHL.com:  Winnipeggers part of new fleet.  Both Clark and Gregoire are important cogs in the wheel of the Caps and hope to make their hometown team one day.

Globe and Mail:  Kirk Muller echoes Badger Bob.  The Canes got a coach that many teams had their eyes on.  While the ship is still listing right now, expect it to get righted soon enough.

News and Observer:  Hurricanes finally break through.  The Jets cannot afford to take this team lightly.  After being giant killers and knocking off the streaking Bruins, Winnipeg cannot afford to take tonight off.  They must attack the Canes from the start of the puck drop and play a full 60 minutes if they want to leave for Detroit with 2 points in the bank.

Triangle Business Journal:  Skinner Canes’ most valuable in terms of points for pay.  While player value usually can’t be broken down to a dollar amount(as it doesn’t factor in many intangibles), in this case Skinner’s $38,000.00 per point looks a lot better than Staal’s $431,000.00 per, especially when other factors are considered.  (registration required to read full article).