Jets Site:  Jets team up with Bell Media to support Christmas Miracle.  Bring a toy or cash donation to Friday’s game against Carolina and be entered to win an autographed Andrew Ladd jersey.

Winnipeg Free Press:  The next Iginla?  While it might be too soon to be making this comparison, the young Jets forward has opened many eyes with his speed and goal scoring ability.  He will need to add passing to his game though as he often times holds onto the puck when he could distribute it to an open guy on his line.

Winnipeg Free Press:  Noel works Jets hard after big win.  The one thing a coach like Noel knows is that you need to guard against complacency.  While the Jets have reeled off 3 straight wins over some better than average competition, you cannot take a team like the Hurricanes lightly.  They just beat the Oilers in Edmonton 5-3 and looked dangerous all game.

Winnipeg Free Press:  Jaffray’s miscue was nothing to joke about.  The Jets 4th line has looked good at times, and with Klingberg on it has brought some energy to the team which resulted in one chance, despite their limited ice time.  As it says in the article, I’m sure nobody was happier than Jason Jaffray when Bryan Little scored what proved to be the game winner.

Winnipeg Free Press:  A plan for foot soldiers.  Further to the article  above, the Jets haven’t been in opportunities to use their 4th line late in games.  These guys have to be able to go 10 minutes (or longer sometimes) without playing and then are thrown in to give the team a boost.

ESPN Twin Cities:  Jets resurrection means renewal of northern hockey rivalry.  Great read and something I have been saying for awhile as I think the Wild can be the Jets best rivals due to proximity.  I didn’t realize that the Jets 1.0/North Stars used to play every boxing day.

Winnipeg Sun:  Jets draw inspiration.  Quite amazing what simply showing up can do to buoy the spirits of these kids.  Great to see the organization out and about in the community.

Winnipeg Sun:  Jets defence states its case.  There appears to be a total team commitment, which has in large part seen the players adopting coach Noel’s system.

Winnipeg Sun:  Slater slick in faceoff circle.  While Slater sits behind Bryan Little on the Jets in faceoff winning %, his value was on full display in the 3rd period against the Bruins in the Jets zone, when he took numerous faceoffs (and won). 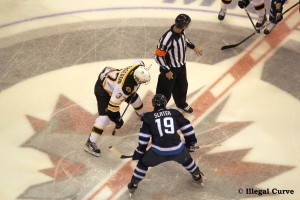 Winnipeg Sun:  Byfuglien keeps it simple.  There is no question that there has been a tangible change in his game of late, which not surprisingly coincides with the Jets change in fortune.

Globe and Mail:  Jets fans bring the noise.  When the crowd is bringing the noise, it is simply deafening.  As is stated in the article, Tuesday night was the loudest we had ever heard it get.  We didn’t check the decibel levels but I’d guess it was in the 120db range (115db loud rock concert, 125db pain begins).

TSN:  Winnipeg’s downtown gets kickstart with NHL’s return.  The revitalization of the downtown can be seen each and every night when you have 15,000+ Peggers’ walking and eating around the MTS Centre.  Of course it goes deeper than that.  You can see it with all the redevelopment that is going on, that the downtown of Winnipeg is no longer seen a place to work or drive though at night, but one in which people live and chose to spend their time.

The Selkirk Journal:  Jets film produced by Interlake grad.  The Jets return has inspired many.  He has taken this inspiration and made it into a film.

The Telegram:  ‘Hungry’ Crunch avoid IceCaps’ brooms.  As well as the first place IceCaps have played this season, one area in which they could stand to improve is on the back end of a home and home.   They are currently 1 for 7 in the second game of a home and home.

Globe and Mail:  Oilers upended by Hurricanes.  I watched a lot of this game and while the Oilers appeared listless, the Canes looked dangerous.  They were especially good on the penalty kill, resulting in a number of good shorthanded chances (and 1 shorthanded goal).

News and Observer:  Murphy makes history in debut.  This will make a good little piece of hockey trivia in a  few years.  Who was the first NHL goalie to lose a game before giving up his first goal?