ESPN:  How high can the Jets soar this season?  Scott Burnside and Pierre LeBrun talk about the soaring Jets.  Nice to have the Peg’ being the focus of attention.

Winnipeg Free Press:  Ondrej gigantic.  In the post-game scrum, he remains his cool, confident self, not allowing himself to get too high after knocking off the defending Stanley Cup champs, who had come into Winnipeg undefeated in regulation since the end of October (14-0-1).  As we tweeted last night, he could have been the 1st, 2nd and 3rd star of the game. 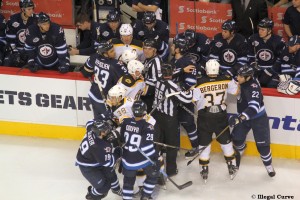 TSN:  Jets end Bruins lengthy streak with gritty win.  The Jets matched their longest winning streak of the season (3 games) and showed they could hold another 3rd period lead.  The question is can they keep this going?  Can they not have a let down against the struggling Carolina Hurricanes.

NESN:  Bruins discover quickly that Winnipeg was worthy of NHL return with passionate show of support from fans.  The media in the press box commented how nobody had every heard the MTS Centre louder.  This sentiment was echoed by the players, even prompting Tanner Glass to say it was the loudest he had ever heard an arena (eclipsing Game 7 of last year’s Stanley Cup Finals).  It is also important to show fans passion to those outside Winnipeg who may question the return.  But after a display like that, it certainly quiets the loudest of objections to Winnipeg’s return to the NHL.

Winnipeg Free Press:  Creating new rivalries.  If Phoenix finds an owner and remains in Glendale, despite going down to a home and home format with them, I could see them being a huge rival (especially if they meet in the playoffs, who gets to claim the whiteout? ).  Our natural rival though will be the Minnesota Wild.  Closest in proximity, both teams have a hugely passionate fanbase that can ensure this rivalry hits levels once seen between the Jets and Oilers or Jets and Flames.

Winnipeg Sun:  Jets say bring on new rivals.  Can you imagine playing a team 6 times during the regular season and then potentially another 7 times in the playoffs.  That will breed a lot of hate.

Winnipeg Sun:  Staying true to my first love.  I would suggest that there are a number of Jets fans who still have the need to break from the team’s they once followed, if last night’s Bruins jerseys were any indication.

Jets on a Deadline:  Game recaps, post-game audio, video highlights and tonight’s 3 Stars as chosen by the media at MTS Centre.

Post-game podcast:  Host Drew Mindell and analyst Richard Pollock break down all of the action while Dave Minuk and Ezra Ginsburg bring you the player reactions.

The Telegram:  IceCaps power past Crunch, into first place overall.  Much like their parent club, the Caps won their 3rd game in a row, although this win vaulted them into 1st overall.   Caps coach Keith McCambridge has his troops playing extremely efficient hockey considering the absences he has had to deal with.

Calgary Herald:  Cane, saw, conquered.  A crazy contest in Cow-town saw the Flames almost blow a 7-4 lead with less than a minute remaining in the game.  The Canes are last in the East and have lost 7 in a row.

News & Observer:  Hurricanes drop wild one in Calgary.  The view of last night’s game from the Carolina perspective.  Canes’ head to Edmonton before they play in Winnipeg on Friday night.

CBC:  Hiring right coach is tricky business.   The Canes haven’t exactly torn it up since Muller took over for Paul Maurice as bench boss having lost four in a row under the new bench boss.