Winnipeg Sun:  Kane never satisfied.  There is no questioning his ability.  Kane has been consistently the most noticeable Jets player on the ice.  He should easily eclipse his previous career best for goals (19) and points (43).

Winnipeg Sun:  Kane made from solid stock.  Pedigree can only take you so far.  While Kane’s parents have given him the gifts, it is his own high level of compete that has made him the most dangerous Jets forward this season. 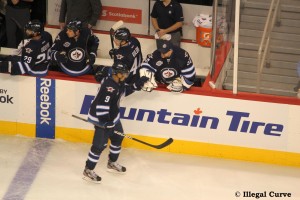 Winnipeg Sun:  Pavelec stacking ’em up.  While the style may have been unconventional, he had the crowd cheering and applauding some of his dexterous saves against the Coyotes on Thursday.

NHL Home Ice on XM:  Ondrej Pavelec calls in.   He talks about the victory over Phoenix, excitement playing in Winnipeg, hockey in Atlanta, playing as many games as he has and making the adjustment to North America starting with his time in the QMJHL.

Star-Ledger:  Devils, Martin Brodeur allow Wild three early goals in 4-2 loss.  Memo to the Jets; fast start tonight against the Devils might be in your best interest.

North Jersey.com:  Ups and downs for Kovalchuk in loss to Wild.  Do Jets fans boo Kovalchuk in solidarity with Thrashers fans or continue to boo him as they have booed all the star players?

Star-Ledger:  Devils short snappers.  Someone having a great and terrible game all at the same time is something Jets fans can empathize with.  All four goalies made an appearance last night.  Zubrus sore ankle.  Devils frustration.

Star-Ledger:  Devils goalie Martin Brodeur – ‘The pucks just aren’t hitting me’.  For Winnipeg fans, they don’t have to worry about Martin Brodeur figuring out his game against the Jets.

NBC Sports:  Martin Brodeur makes Wild look like offensive juggernaut.  When we mentioned on our IC twitter account the Johan ‘Moose’ Hedberg would be starting in net people weren’t happy that the Devils ‘backup’ would be starting against the Jets.  However if you took a look at the numbers and had to pick which goalie was the backup (based solely on those numbers) Hedberg isn’t the name you would chose.