Winnipeg Sun:  Jets snapshots – Noel starting to see his Jets.  Players forming identity.  Waiting for video review.  Kane’s strong game despite injury scare (we asked him about the incident at the end of his post-game interview, listen here).  Henrique likes facing Jets.   Jets give up another 5 on 3.  Jets shorty.  Brandon product Bryce Salvador puts out some dough to get friends/family to game as did Devils coach Peter DeBoer.  Cam’s Janssen’s mystery injury after hit by Kulda. 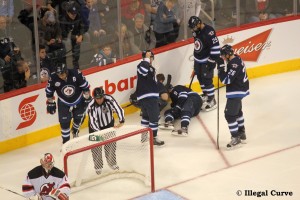 Winnipeg Sun:   Jets on the mend.  One can only image this team’s potential when they are back to their NHL lineup.  At one point in the game they had one shift with 4 of 5 guys who started in AHL this season (Klingberg/Jaffray/Kulda/Flood).

Winnipeg Sun:  Hedberg comes ‘home’.  Similar to the response received by Shane Doan, the Moose suffered through the crowd chants, but received a round of applause (although no standing ‘O’) when his name/picture was shown on the jumbotron, as someone with a past connection to Winnipeg.

Winnipeg Sun:  Stapleton happy to be extra man.  The Jets need to have this type of selfless player who is willing to adapt his game to what is needed by the team.

Star-Ledger:  Winnipeg Jets’ return sparks realignment debate.  As was discussed on CBC’s Satellite Hotstove last night, the Jets would play in a modified Central, which would see both the Jets and Stars added to it.  Personally I think this is best as it would allow for minimal time zone travel.

Star-Ledger:  Ilya Kovalchuk says Winnipeg fans should cheer him.  Kovalchuk didn’t get the memo that MTS Centre fans boo all the star players and that it wasn’t anything personal, although he personally took it that way.  Despite being a minus 2, Kovalchuk was all over the ice and looked dangerous every time he had the puck in the Jets zone. 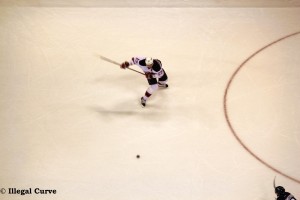 IC:  Jets on a Deadline.  Contains all the game recaps from the newspapers, video highlights and the 3 Stars.

IC:  Post-game podcast.  The Winnipeg Jets have defeated the New Jersey Devils 4-2 at the MTS Centre, Drew Mindell and Richard Pollock give their post game thoughts from the press box. 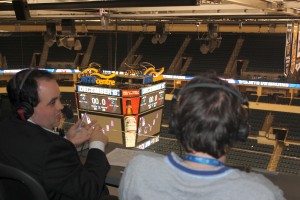 Boston:  A team for the ages.  The Jets, winners of their last 2 games, are in for a real test on Tuesday night when the big, bad Bruins come to town (after playing the Penguins on Monday night).  The Bruins are 9-0-1 in their last ten games and are the hottest team in the NHL.

Boston:  Zdeno Chara points Bruins in right direction.  As big ‘Z’ goes, so goes the Bruins unsurprisingly.  The Jets learned that lesson the hard way when they played in Boston last time.

Worchester Telegram:  Peverly, Kelly prime-time players.  When you have a third line putting up production numbers that would make some team’s first lines jealous, you know you are getting your $$$$ worth.

Boston Globe:  Bruins torch Maple Leafs.  Leafs fans have to wonder who they upset, to cause them so much angst against the Bruins.  They have now lost 4 straight against the B’s.

Comcast:  Bruins penalty kill slows surging Leafs.  The PK continues to climb the NHL standings (6th overall) and the Jets will be had pressed to get their 17th ranked PP some good opportunities against these stingy Bruins.