Winnipeg Free Press:  Jets ‘D’ dominates.  Considering the make-shift group who have had to step in for injured players like Hainsey and Enstrom, the Jets ‘D’ has been pretty impressive.

Winnipeg Free Press:  Jets likely to play in Central time zone.  I’m with Gary.  I like the idea of the Jets playing in a modified Central Division with teams like the Wild and Blue and Hawks.  New rivalries will develop over time.  And I’m sure the NHL will structure it so we would still see the Oilers, Flames and Canucks as well as the Leafs, Sens and Habs.

Winnipeg Sun:  Swede brings the speed for Jets.  You can tell he listened to the Jets coaches in training camp who insisted that he make improvements to his game down in St. John’s.  Coach Noel informed the media that he got a great report IceCaps coach Keith McCambridge about the progress of Klingberg.  He looked good last night, brought some great energy. 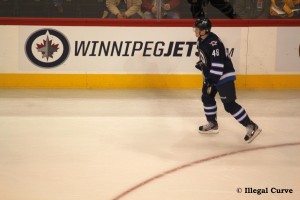 Winnipeg Sun:  No welcome mat for Coyotes.  It was like watching a boxer in the ring who was punch-drunk.  The fans were either wildly booing or cheering depending on who had the puck.  The 1st period each and every Coyotes player was booed although the biggest boo’s were received by Keith Yandle and Shane Doan.

Winnipeg Sun:  Jets fans give Doan standing ‘O’.  You could tell, when asked by IC’s Ezra Ginsburg in last night’s scrum,  that the Coyotes captain was genuinely touched by the Jets fans standing ovation.  I thought it was an incredibly classy move on the part of Jets fans in the MTS Centre.  To hear Doan’s comments specifically about the Standing ‘O’ click here (46 second mark of audio).

Winnipeg Sun:  Boo for Doan?  Classy.  Did Jets fans go too far in booing Doan?  Signs from last night.  Kyle Wellwood’s hands.  Old defensive partners.  Byfuglien shots vs. shooting %.  Stapleton’s solid evening.  The fans were in a booing mood, even giving it to the guy who got the tv commercial break triva wrong.  Wrong couple won the Kiss Cam, although better than during Ottawa game when they seemed to shoot couples who weren’t couples, can you say uncomfortably comfortable.  Pavelec was dynamite.

Winnipeg Free Press:  Jerseys cleared for….RIPOFF.   I still can’t really tell when someone is wearing a fake vs. someone wearing the real thing.  I’ve heard from fans that they can’t believe how many people inside the MTS Centre are wearing fake jerseys.  Can you tell the difference?

TSN:  Closing out Coyotes is a positive step for Jets.  The Jets were able to beat the Coyotes at their own game last night.  The Coyotes won’t dominate you with offence but they will lull you to sleep a bit with their defence and then wait for you to make a mistake to pounce.  The strong play of 1st star Ondrej Pavelec ensured that any Jets errors were stopped and his save on Turris ended up being the difference maker as Bryan Little scored his 7th right after.

Metro:  Bogosian next Jets big shot?  There is no question that the influence of assistant bench boss Charlie Huddy is having a major impact on the number three overall pick in the 2008 entry draft.  As coach Noel said in the press conference he has had a number of different coaches the past few years and they want to re-build his foundation with the consistency of their system.

Globe and Mail:  Burmistrov goes through growing pains.  Even when not putting up the points, Burmistrov demonstrates skill with the puck and good positioning when he doesn’t have it.  He has played a physical style that seems unexpected given his smaller frame.

Illegal Curve:  Jets on a Deadline.  Game recaps, audio, video highlights and 3 stars as chosen at the MTS Centre. 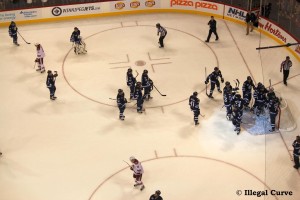 Note:  According to Tom Gulitti (Devils beat writer), Martin Brodeur will start in net tonight (against the Wild) and Johan Hedberg will get start Saturday in Winnipeg.  Are you happy to see the Moose or would you prefer to see future Hall of Famer, Martin Brodeur?

Star-Ledger:  Devils Ilya Kovalchuk after minus 4 performance  – I don’t think anyone slept well.  The Devils, coming off a 6-1 defeat at the hands of the Avalanche, stop in Minnesota tonight in a game against the Wild before journeying on for their Saturday night date with the Jets.

Star-Ledger:  X-rays on ankle negative, expect Dainius Zubrus to play vs. Wild.  The Jets know all too well what can happen when their players block shots.

StarTribune:  Will Devils always have Parise?  Not a surprise that the Minnesota papers are speculating about the future of the talented winger (also a Minnesota resident) who is about to become a free agent but he handles the questions about his future as deftly as he stickhandles with the puck.