Winnipeg Free Press:  Coach keeps whip at bay.  Coach Noel seemed resigned to his team’s fate on Tuesday night.  He didn’t ‘crack the whip’ in practice, as he is using a bit of the carrot on the team before he gives them a good whack with the stick.

Winnipeg Free Press:  Let ‘er rip….then let it go.  I agree with Ed’s assessment.  The city has an NHL team back and while it isn’t the same one that ‘technically’ possess the records of Hull, Hawerchuk and Selanne those are relationships that are bigger than who owns them.  If you don’t believe me, wait until December 17th and see the reaction Teemu Selanne gets.

Globe and Mail:  Jets fans finally get to vent after 15-year grudge.  I get it.  It is the Jets 1.0 vs. Jets 2.0.  I think that if the Coyotes find an ownership group and stay in Glendale they could, because of the shared history with the city, be one of the Jets best rivals.  But personally the ‘grudge’ (if you could call it that) against Phoenix died (for me) on May 31st, 2011 when True North officially announced that the NHL was returning to Winnipeg.

Winnipeg Sun:  Jets penalties have to stop.  The Coyotes come in here being the least penalized team in the league, while the Jets are at the other end of the spectrum.  About the only good news for the Jets if they do make a couple of trips to the sin bin, is that the Phoenix power play is ranked 28th overall in the league. 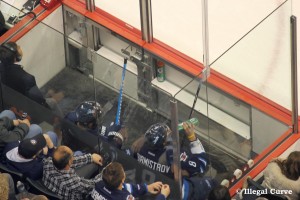 Winnipeg Sun:  Jets’ Pavelec needs to be better.  While he could certainly have played better in a couple of games, it is difficult to pin the Jets current circumstances on the play of Ondrej Pavelec this season.  As Ted Wyman correctly points out, wandering defencemen and bad penalties have put the Jets at the biggest disadvantage, not the play of their goalies.

Winnipeg Sun:  Goal brings Jets’ Russian relief.  The Jets need the affable winger to get back to his early season production numbers.


Winnipeg Free Press:  Jets franchise value jumps on magazine’s list.  It isn’t terribly shocking that the Jets value jumped from what it was with Atlanta.  The true test will be to see how this team is valued come this time next year.

Winnipeg Free Press:  Jets setting pace.  The feeling in downtown Winnipeg is changing.  You can see it in the buzz following a Jets game when people are walking around and going to restaurants, when normally the streets would be empty.  You can see it in the new buildings and restaurants that are now seeking out space in the downtown.  While it isn’t all attributable to the return of the Jets, a big portion of it is the result of this.

Winnipeg Free Press:  NHL’s gain is arts groups’ pain.  The euphoria of the Jets return continues to be the focus of entertainment dollars as individual tickets that appear for games are being snapped up as quickly as they appear.  This is having a negative impact on walk-up sales for the ballet, symphony and other arts events.  Once the novelty of the Jets return wears off, Peggers’ will likely return to enjoying these events in addition to Jets games.

NHL.com:  Ducks fire Randy Carlyle, hire Bruce Boudreau.  While this isn’t Jets 2.0 related, it is relevant to the Jets 1.0 as well as the Manitoba Moose as this city has a deep relationship with Randy Carlyle.  About the only good news for the former Ducks coach was he was signed to a 3 year contract in August of 2011.

Winnipeg Sun:  Coyotes have learned to tune future talk out.  When you hear the audio of coach Tippett speak you get the sense that he is less than pleased with Matthew Hulsizer and the circus that took place last season.  This coach wants to talk hockey and how his team is doing on the ice.  Everything else is outside his control and so he doesn’t want to engage in that conversation.  To listen to coach Tippett speak to the media click here.

Winnipeg Sun:  Ex-Jet deserves applause, at least until puck drop.  I expect Jets fans to handle the return of the Jets 1.o with class.  Once the game begins they are free to boo whomever they like as many visiting teams stars have experienced.  But this is still ‘Friendly Manitoba’ for a reason and until that puck drops let us hope that moniker continues to ring true

Arizona Republic:  Coyotes captain Shane Doan returns to Winnipeg.  As I said above, the stance of the Coyotes captain last season during the relocation talk is understandable.  He has set down roots in Arizona and didn’t relish the idea of moving, especially late in his career.  All we in Winnipeg heard was “he doesn’t want to come to Winnipeg” whereas he was simply stating that he wanted to remain in Arizona.  While we might personally not agree with that stance, he is entitled to his opinion.