Note:  The Jets have until tomorrow at 5 pm ET to get their roster down to 23 (currently at 26).  Be sure to keep it locked to illegalcurve.com and on social media including Twitter | Facebook | Instagram for any roster moves as well as the latest Jets news from training camp.

TSN:  Young Jets ready to produce for Maurice.  Dennis sets you up with this article as we get ready for training camp to end and the regular season to start.

ESPN:  Ranking all 30 teams by  forwards (Paywall).  Jets ranked 14th in this article.

Illegal Curve:  Coach Maurice scrum.  How tough was it to have that conversation with Jay Harrison?  What separated him from the other two defencemen?  What was the biggest thing JC Lipon showed during training camp?  On telling young prospects they’ve made the team.  On having four guys who didn’t play in NHL on the roster.  Update on status of Thomas Raffl.  Has he set his D pairings?  His excitement level of having the projected lines (as they were today) to start regular season?  How does he feel the team is most different from last season?  Why Wheeler with Little/Ladd and Scheifele with Perreault/Ehlers.

Illegal Curve:  A look at the Jets lines and D pairings.  After the moves made earlier in the morning the Jets had 24 players on the ice for the skate at the MTS Centre today.

Illegal Curve:  JC Lipon re-assigned to Moose.  He had a good camp but was seen as the likely player heading back to the Moose prior to getting the roster down to 23.

Klein Zeitung:  Thomas Raffl only a text message away from NHL dream.  The article is in German so take the google translate with a grain of salt.  It states that on Sunday evening the Jets and his European club started talks on a transfer fee.  Of course it did state a two way deal so perhaps it should say NHL/AHL dream.  If you’d like to read the article in German here is a link.

Winnipeg Free Press:  So, what have we learned? (Paywall).  Tim writes about the team successfully filling the available spots in the roster from within the organization.

Winnipeg Free Press:  Jets enter real season healthy as can be.  (Paywall).  When you can begin a new season with a complete roster and you’ve escaped the pre season without significant injuries you are already ahead of the game.

Winnipeg Sun:  Relief as pre season ends.  It isn’t just the players that are happy that the pre season is over.  Fans are more than ready to kick off the 2015-16 season. 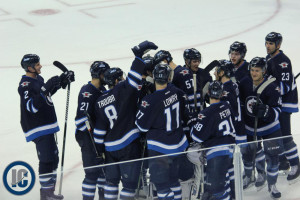 Sportsnet:  Underestimate this year’s Winnipeg Jets at your own risk.  In case you missed this one they say the Jets are the Canadian team of the future.

Illegal Curve:  Moose reduce training camp roster by five.  They are now down to 26 players in camp.

Winnipeg Sun:  Moose lose to Iowa Wild.  The drive up I29 from Grand Forks to Fargo didn’t sit well with the Moose who dropped the second game of the pre season.