Note:  The Jets played their final pre season game last night in Calgary.  The team has the day off today with training camp resuming on Monday.

Winnipeg Free Press:  Ready or not, here comes season. (Paywall).   A few days left of training camp with a couple of more cuts and then boom we are ready to kick start the 2015-16 season.

Sportsnet:  Chiarot scores to help Jets edge Flames.  Who would have thought that young Ben Chiarot would be the top scoring Jets player after he added his third of the pre-season last night. 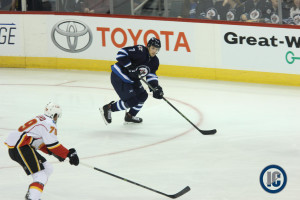 Calgary Herald:  Flames’ youngster stands out in one-goal loss to the Jets.  A look at the game from a Flames beat writer.

Sportsnet:  Underestimate this year’s Winnipeg Jets at your own risk.  They say the Jets are the Canadian team of the future.