Winnipeg Free Press:  Noel sees points piling up in December.  Which is a good thing if the Jets want to get to Noel’s magic number of 96 points and make the post-season.

Winnipeg Sun:  Jets set to ‘make hay’.  The Jets can go a long way to ensuring success if they take advantage of the home cooking they will be seeing for the rest of November and almost all of December.  They only leave the Peg’ on the 10th (Detroit) and 27th (Colorado).

Telegraph-Journal:  Randy Jones itching to return.  Really interesting Q & A with the Jets defenceman wherein he compares living in Winnipeg to other NHL cities, his closest friends on the Jets, what a standard day is like for him while injured, impressions on coach Noel, meeting Eddie Vedder of Pearl Jam and more. 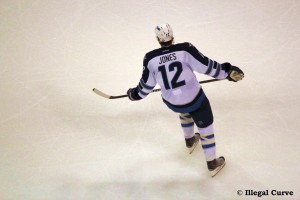 Winnipeg Sun:  Special-teams woes dog Jets.  The last thing any team can afford to do is play undisciplined hockey.  It will surely drive coach Noel crazy as he tries to get this team to buy into his system.

The Telegram:  IceCaps less than middling in the middle.  Looks like the baby Jets are having some difficulty in the 2nd period.   The team is self-reflecting having dropped 3 of the last 4 games including a sweep at the hands of the team that formerly resided in St. John’s (Toronto Marlies).

Globe and Mail:  Spezza pushes Sens past Hurricanes.  The Sens needed the veterans to get the victory tonight and Craig Anderson had the bounce back game Ottawa needed him to have, and always creative Jason Spezza potted 2, including his 200th.

Ottawa Citizen:  Penalty kill secures Senators’ win over Canes.  Looks like it isn’t just the Jets who are sometimes prone to taking a lot of minor penalties.  The Senators took eight penalties although the special teams played pretty well, killing off 7 of the opportunities.

Ottawa Citizen:  Only Filatov can put end to KHL question.  Looks like the Jets will be the 2nd stop on the Nikita Filatov tour as the talented but enigmatic Sens winger gets his chance to prove to GM Murray and the Sens brass that he belongs in the NHL.