Note:  Good luck to the Winnipeg Blue Bombers in today’s 99th Grey Cup as they attempt to end the CFL championship drought (since 1990) in this city.  Game starts at 5 pm cst.  For all things Bombers here are links to the Winnipeg Free Press, Winnipeg Sun and TSN for excellent game coverage.

Winnipeg Sun:  Jets snapshots – Early missed chances.  Lack of whistles in Jets games, missed opportunities against B’s, Wheeler doesn’t get the love from Bruins fans, Bursmitrov’s pp role and defensive prowess, great work by Slater to set up Buff’s goal, questionable calls get Boston back in it, Jets outworked in 2nd, Fehr still not there yet, Jets are solid vs. Eastern Conference except Northeast.

Red River Valley Echo:  Jets star gives game tickets to blood donors.  Great move by the Winkler native to encourage people to give blood while at the same time giving those who might be on the fence some incentive to give.

TSN:  Jets finally begin long stretch at home.  The Jets season should be made or lost based on how they do at home in December.  They play 13 of the next 15 at the friendly confines of the MTS Centre and the home crowd should be a big boost as per usual. 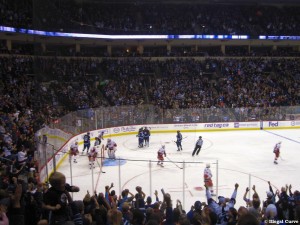 NESN:  Winnipeg’ eventual realignment could be worse if NHL played by college football rules (video).  Looks like Winnipeg’s return to the NHL has some folks in Beantown looking on a map.

Sportsnet:  Send your Jets to the All-Star game.  I remember the days when All-Stars games were actually played by All-Stars.  If you were going to send a Jets player to the game, who at this point deserves to be there?

Illegal Curve:  Jets on a Deadline.  Game recaps of yesterday’s Jets/Bruins game from all the major newspapers, video highlights and 3 stars.

TSN:  Marlies score four straight goals in win over IceCaps.  Looks like the Caps took a page from the parent club last night.

The Coloradoan:  Ulanski signs with Eagles.  He has put up some solid numbers (83, 109, 96 points) in the CHL and I’m kinda surprised that he hasn’t received more of a look at the AHL level (just 14 games with the Admirals over 3 seasons).

IIHF:  Karlsson flies with Ottawa.  The young gun was -30 last season but is leading the Sens in points by a defenceman.  Here is a Q & A with him.

Ottawa Citizen:   GM Murray refuses to coddle Filatov.  The enigmatic Russian had previously confounded the Blue Jackets organization and it doesn’t appear that the Senators have figured out the key to unlocking his NHL potential.

Ottawa Sun:  Lame Project Mayhem insults Sens fans.  In case you are unaware of what this is, essentially a Leafs blogger is trying to get a number of former Senators players nominated to the starting lineup in Ottawa for this year’s All-Star game.  Of course these shenanigans aren’t going over too well in the Nation’s capital.

Ottawa Citizen:  Sens’ Craig Anderson gets chance to redeem himself.  The Sens take to the ice today against the Hurricanes having faltered in their last 10 games to a 3-5-2 record.  Both teams are desperate for a victory and the Sens are hoping that goalie Craig Anderson bounces back after a rough outing against the Penguins on Friday.

Ottawa Sun:  Winchester promoted as Sens shuffle lineup.  Coach MacLean has shuffled this lineup a number of times hoping to get his players going so depending on how his team fares against the Canes, it is anyone’s guess what team the Jets will face on Tuesday night.