Note: Be sure to stay tuned to IC.com all day as we will have audio following practice from both teams and as always, will have the post-game audio up on site.

Winnipeg Free Press:  Jets like to work from home.  We are certainly about to find out if that is true or not very soon.  With 13 of the next 15 games at home the Jets will have their best opportunity to get acclimatized to Winnipeg and to use the very friendly confines of the MTS Centre to their full advantage.

Winnipeg Sun:  Jets’ plug-and-play defence.  Most teams that have lost key defenceman like an Enstrom or Hainsey, would have to pray they could get someone serviceable from the press box.  When the Jets then lose Meech and Jones they next turn to their AHL affiliate IceCaps and Festerling(injured), Flood and Kulda have stepped in and played well. 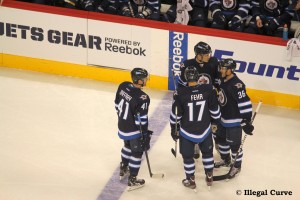 Winnipeg Free Press:  Scheifele a shoo-in as junior invitee.  For most in the Peg’ who have been unable to follow the Jets #1 draft pick in the 2011 Entry Draft while he has played with the Barrie Colts in the OHL, this will be a great opportunity to see his progress on one of the biggest stages for a player his age.

Winnipeg Free Press:  Beating Flames in 85′ so sweet – MacLean.  MacLean will always have a warm spot in the hearts for many in this city for the role he played with the Jets 1.o.  Some Winnipeg Jets 1.o trivia – Which team did the Jets trade Paul MacLean to and which player did they get back in return?

Ottawa Citizen:  Now all Filatov has to do is score.  The Senators have given the enigmatic Russian the best chance for success.  It is on Filatov to seize the opportunity.

Globe and Mail:  Senators roll the dice with Erik Karlsson.  An interesting story on how his dad convinced him to go from wanting to be a goalie, to agreeing to try out defence.   As he continues to develop, the Sens know they have someone who has the long-term potential to dramatically improve this team.

Ottawa Citizen:  Sens injury update.  Looks like the Senators will use the same lineup against the Jets that they used against the Carolina Hurricanes on Sunday.

Ottawa Sun:  Happy Jets memories for Sens coach.  I wonder if MacLean knew, when making his dinner choice, that Hys downtown had moved.  The place formerly known as Hys (across from the Medical Arts Building) is now a parking lot.

Ottawa Citizen:  Crosby under Sens’ skin.  Count me in as someone who will watch the December 16th rematch between these two teams following the war of words.