Jim Ludlow wins for business achievement. Death to the Thrashers and their low standards. Young ones still learning to fly. Surging Jaffray called up from The Rock. Winnipeg Jets leaning on AHL to boost sagging season. Jets need to protect their house. Jets defenceman Derek Meech to miss 6-8 weeks after undergoing surgery. Veterans and rookies power St. John’s to close 4-3 victory over Whale.

Financial Post:  Jim Ludlow wins for business achievement.  He won an award which is given to an in-house lawyer who has successfully made the leap from the legal office to the corner office to run a corporation.

Winnipeg Free Press:  Death to the Thrashers and their low standards.  So much for that “free year”.  While I never anticipated fans to just be happy that the NHL has returned, the return of expectations is a good thing.  Of course these need to be tempered by reality.  Just because the team give 100% effort doesn’t mean they are going to start winning, however same will be evident on the ice.

Winnipeg Free Press:  Young ones still learning to fly.  Many of these young Jets were tossed into the fire a little too early.  For some this can be a good thing, but for others without the development in Junior or the AHL, they haven’t been allowed to develop skill sets that are necessary for long term growth as an NHL player. 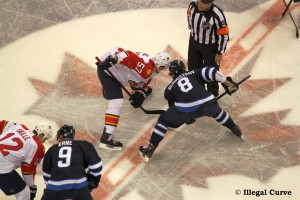 Winnipeg Free Press:  Surging Jaffray called up from The Rock.  The Jets are going to need Jaffray to bring the energy tonight.

Globe and Mail:  Winnipeg Jets leaning on AHL to boost sagging season.  Guys from the AHL like Jaffray are hungry.  They will bring that hunger and determination to the game and will hopefully push the complacent forwards a bit.

Winnipeg Sun:  Jets need to protect their house.  Will home cooking be enough to get the Jets some victories?  The team will be spending the vast majority of the next 6 weeks in Friendly Manitoba and we will see if the home crowd can help get this team some wins.

Winnipeg Free Press:  Jets defenceman Derek Meech to miss 6-8 weeks after undergoing surgery.  It is rather unfortunate that the Winnipeg native never really got a chance to get into a lot of Jets action before he went down with injury.

Winnipeg Free Press:  Veterans and rookies power St. John’s to close 4-3 victory over Whale.  Winnipeg NHL fans are going to start to get envious of the fans of the Jets AHL affiliate as these guys seem to be able to pull off win after win and are 6-0-2-0 in their last 8 games.

Winnipeg Sun:  Zapping Bolts not easy.  The Bolts players enjoyed their off day all over downtown Winnipeg yesterday but should be ready for tonight’s action.