Note:  Don’t forget to join us on the Illegal Curve Radio Show on TSN Radio 1290 from 12-3 pm cst.  We will have on a number of informative guests, including Jets GM Kevin Cheveldayoff.

Winnipeg Free Press:  Pair Buff with Stuart.  Stuart is a stay at home d-man who could teach Big Buff a thing or two about playing the position.

Winnipeg Free Press:  Flood making most of big chance.  He already has more goals than a number of his fellow Jets and has proven to be a pretty steady influence on the blueline.

Winnipeg Free Press:  Canada Post hustles to mark history.  Again I ask the question, are these stamps valuable as a collector’s piece?

Winnipeg Sun:  Mason back between the pipes.   While Pavelec is going to continue to be the workhorse on this team, Mason can expect to still get into a number of games this season.

TSN:  Jets coach Noel address Winnipeg’s recent struggles.  Coach Noel doesn’t act like he has the most talented team in the NHL, but he does expect them to perform to the best of their abilities and this means playing for an entire game, not just a period or two.  It also requires playing disciplined hockey and eliminating the dumb penalties. 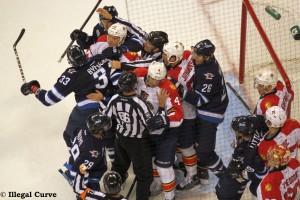 Winnipeg Free Press:  Marco Rosa a scoring force for IceCaps.  The Jets liked the Moose product and are happy with the decision they made to keep him in the family.  While this might not mean a call-up to the big leagues necessarily, he will continue to work hard to get that shot.

Winnipeg Free Press:  Pasquale to start in net for IceCaps against Whale.  The 20-year-old has a stellar 1.75 goals-against average and .935 save percentage for the AHL club.  Numbers like that will get him some attention.

Northern Coloradoan:  Eagles strengthen defence with addition of Gord Burnett.  When the NHL makes call-ups from the AHL, the AHL needs to get its players from the ECHL, which means the ECHL has to cast its net wide to locate players to fill its holes.

Winnipeg Free Press:  Hanging on for dear life.   For Arniel, you have to think he is wondering what may have been, had he stayed on with the Moose organization instead of heading off to Columbus.