Note II:  The Jets return to the ice today as they get ready for the final game before the All-Star game against the Columbus Blue Jackets tomorrow night at 8 pm at the MTS Centre.  They will be practicing at 11 am at the IcePlex.

Winnipeg Free Press:  Outdoor Heritage Classic game could be postponed.  There would be a lot of disappointed Jets fans in this Province if the game isn’t played next season.

Winnipeg Free Press: Hockey world taking notice.  Hard to ignore this Cinderella story as they are half way to the ball.

Winnipeg Sun:  Rugged, hard-working Jets turning heads.  Ted writes how the Jets are finally getting their due from across the land as folks who picked these Jets to be basement dwellers this season are having to revise their pre-season predictions as the team cruises towards a possible playoff spot (imagine the pandemonium at MTS Center for first playoff game).  He also discusses the Jets streaking and potential award contenders. 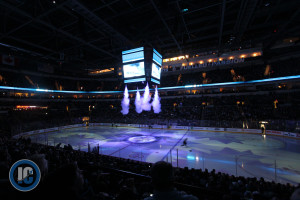 Illegal Curve:  Daniel Carcillo gets six games for hit on Jets Mathieu Perreault.  Jets fans were crying out for blood following the vicious hit he delivered to Perreault on Friday and the NHL Department of Player Safety dropped the hammer yesterday.

Illegal Curve:  Dustin Byfuglien named NHL’s first star of the week.  It was quite a week for the Jets big man as he was recognized by the NHL for his contributions.

TSN 1290 Winnipeg:  Hustler & Lawless (audio).  Jets GM Kevin Cheveldayoff joins the guys to discuss the first half of the team’s 2014-15 season. Cheveldayoff says he’s happy with how the team has stepped up in the face of injuries gutting the blue line. Cheveldayoff discusses the success of moving Dustin Byfuglien from forward to defence.

TSN 1290 Winnipeg:  Rona Roundtable (audio).  Tim Campbell of the Winnipeg Free Press chats with Rick about the Jets being in a position they haven’t been in since moving to Winnipeg.

TSN 1290 Winnipeg:  The Big Show (audio).   Following up a 46-save performance versus the Stars, Ondrej Pavelec stopped all three shootout attempts in the Jets’ 4-3 victory over the Coyotes. Shane Hnidy joins the fellas to explain how Pavelec may have gained his form at just the right time.

Hockey’s Futures:  Red Deer’s Nogier not a rebel when it comes to his schooling.  Sounds like quite the smart, forward thinking young man.

Daniel Carcillo gets six games for hit on Jets Mathieu Perreault
Winnipeg Jets get Jacob Trouba back; What to do with excess defencemen?