Winnipeg Jets get Jacob Trouba back; What to do with excess defencemen?

Trouba is back. Now what do the Jets do with the excess defencemen? 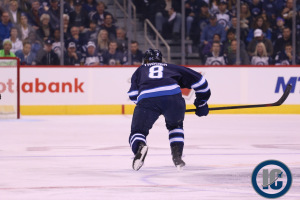 The early return from sick bay continued today as the Jets got sophomore defenceman Jacob Trouba back at practice in a regular red defenceman jersey about ten days before he was originally scheduled to return.  Coach Maurice, on January 15th, reassessed Trouba’s return as closer to the All-Star break.

Coach Maurice confirmed after practice today that if  Jacob Trouba is cleared by medical staff he should be available for the game Wednesday against the Blue Jackets.  Stuart was off today for maintenance but will be evaluated tomorrow says Jeff Hamiton of CBC.

The question now becomes what do the Jets do with the excess defencemen?  It seems likely that Jacob Trouba will return to his familiar spot beside Mark Stuart (assuming he plays) which would have Jay Harrison as the 7th defencemen.

This leaves Adam Pardy and Paul Postma as the extra, extra defencemen.  The Jets have been carrying two so it seems likely they will send one down and possibly keep the other up with the team.

Or might we see a trade rather than take the chance of losing one when they have to clear waivers on way to St. John’s?

Keep it locked to @illegalcurve for any news on moves made by the team.