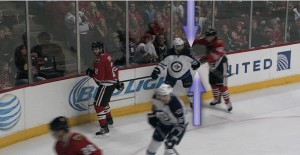 Jets fans finally got the news they have been wondering about since the vicious hit that took out Perreault in the Friday night contest in Chicago.  According to Darren Dreger of TSN Carcillo will not be appealing his six game suspension.  Ironically, Carcillo is eligible to return to the Blackhawks line-up on Friday, February 6th against the Winnipeg Jets at the MTS Centre.

From the NHL Department of Player Safety:

The incident occurred at 19:50 of the second period. Carcillo was assessed a minor penalty for cross-checking.

Carcillo is considered a repeat offender under the terms of the Collective Bargaining Agreement and, based on his average annual salary, will forfeit $40,243.92. The money goes to the Players’ Emergency Assistance Fund.

As Carcillo sat out Chicago’s game Sunday night while awaiting his hearing, his suspension will remain in effect through the Blackhawks’ next five games.

Here is the explanation video: