Winnipeg Free Press:  Despite the flaws, Jets keep the faith.  Slowly but surely this team is starting to pull it together.  Perhaps they didn’t do it as quickly as fans would have liked but the next 4 road games should be an interesting test for this young Jets team.

Winnipeg Free Press:  Taking peek at prospects.  While we recently took a look at the Jets 2011 draft class, here is an overall assessment of the Jets current prospects to watch. 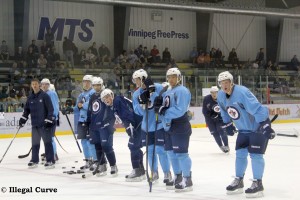 Winnipeg Sun:  Jets GM won’t pull trigger on trade.  I don’t really see the value in the Jets pulling off a big trade right now.  This team is still working out the kinks and nobody was expecting them to rocket out of the gate.

Winnipeg Sun:  Second strong start has Jets goalie smiling.  Pavelec was fantastic during the Florida leg of the Jets road trip and with Mason nursing an injury they are going to need him to continue his strong play during the New York leg of the trip.

Soviet Sport:  Alexander Burmistrov – a simple guy from a village.  I’m sure that title is getting lost in translation.  I’ve included the link via google translate as I don’t suspect many of our readers are up-to-date on their Russian.

Winnipeg Free Press:  Doer fondly reflects on besting arena foes.  Unfortunately this city still has some small-time thinkers plaguing us and it is only when one thinks bigger that you are able to pull off these major projects.

Winnipeg Free Press:  Brodeur battles back from latest injury.  While the Jets don’t play the Devils for 2 games (next game is Islanders tomorrow night, it pays to be aware that the 39 year old future hall of famer could be back and facing the Jets on Saturday night.