Winnipeg Free Press:  Jets injuries create opportunities.  Will a player like Festerling or Flood step up while the Jets have so many key injuries on the blue line?  If so, now is the time. 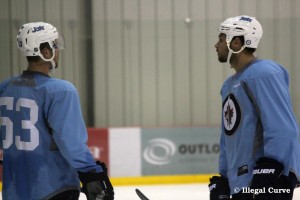 Winnipeg Sun:  Kane silences skeptics.  Amazing what more ice time and better line mates can do for a player.

Winnipeg Sun:  Jets fever rages on.  The seat exchange is open and already brisk sales are, not surprisingly, occurring.  Would you use the seat exchange to sell/buy tickets?


Metro News:  Wellwood maligned for the wrong reasons.  When a square doesn’t fit easily into a round hole we get confused and immediately feel this need to label it as “something” flawed.  I have liked Wellwood’s game this season.  Sure he might not be a prototypical player but considering his pay ($700,000.00) he has played well above this level for the Jets.

Washington Post:  Having lost fan interest in Atlanta, Jets get a warm embrace in return to hockey-mad Winnipeg.  Nothing terribly informative for those here in the Peg’ but always good to see that Winnipeg is getting a mention in the major US papers.

TSN:  Injury bug bites Jets on blue line. Good news is that Chris Mason was back on the ice although in this case he can’t take the spot of all those missing D-men.

ESPN:  Thin blue line – early season disappointments.  This is why you don’t make selections in fantasy sports based on guys who play for “your team”.  It often leads to taking someone way too early because you have selected with your heart and not your head.

Vancouver Sun:  No right answer to NHL realignment.  Unless Phoenix has a buyer that has vowed to make hockey work in the desert, I still don’t see how we are discussing realignment before relocation has been settled.

Winnipeg Free Press:  Jets raid IceCaps after injuries.  Interesting that Paul Postma, the last defenceman cut from the Jets and the current leader in points for d-men on the IceCaps was passed over.  His offensive skills aren’t being questioned but his defence is.

The Telegram:  Goal of IceCaps Care is to provide some big assists.  Always nice to hear of hockey organizations making an effort withing the community and former premier Danny Williams has already shown he is dedicated to giving back.

Winnipeg Free Press:  Longing for the glory days.  For years they have been that ‘other team’ from New York.  While the Rangers and Devils have hogged the spotlight in the New York Area since the mid 90’s, the Islanders might be the team to watch as their young core continues to develop.

Newsday:  Travis Hamonic looks forward to game against Winnipeg Jets.  There are a number of Manitobans playing in the NHL on various teams who are all looking forward to seeing the Jets jersey on the ice.