Note:  The Jets return to the ice today following a day off yesterday as they get ready for a Friday night date with the Tampa Bay Lightning.

Winnipeg Free Press:  Following the leaders.  Ed writes it isn’t just the players wearing letters on their chests that represent leaders on this team. 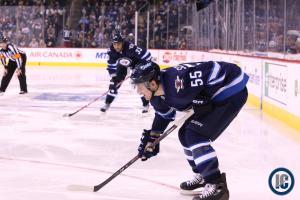 Winnipeg Sun:  Trying Byfuglien in front of the net to ignite punchless power play.  Throwing the big fella in front to wreak havoc to the opposing goalies.

Winnipeg Sun:  Jets long-awaited win was the sum of all parts.  Total team effort is always necessary and we are going to need to see that on Friday night.

Prince Albert Daily Herald:  Sometimes, you can go home again.  While he anticipated covering 2013 1st round pick Josh Morrissey he was still able to come full circle at the MTS Centre.

Winnipeg Jets official site:  Inflight volume 1 – Mathieu Perreault.  He may not have known any of the players on the team but he was pretty familiar with the city of Winnipeg.  Learn more about the centre who the Jets signed to a three year deal this past summer.

Winnipeg Jets official site:  Inflight volume 1 – Nikolaj Ehlers.  Learn more about the top selection by the Jets when they selected the Danish prospect at the 2014 NHL entry draft ninth overall.

TSN 1290 Winnipeg:  The Big Show (audio).  Paul Edmonds joined the Big Show with a look at what has made Adam Lowry such an effective player early in the season for the Jets.