Note:  The team has the day off so there will be no skate.

Note II:  While the Jets may be off we are not.  Join us for NHL Mid-Week on TSN 1290 Radio tonight, starting at 6:00 PM.  Join Drew, Ezra and Richard as they analyze last night’s Jets-Hurricanes game, and look ahead to Friday’s contest against the Tampa Bay Lightning. Guests: Joe Smith (Tampa Bay Times) and Dave Jamieson (TSN 1260 Radio Edmonton).

Winnipeg Free Press:  Step in right direction.  Gary writes that there is an expectation of beating the bad teams and while you cannot entirely dismiss the victory it will be important to see what this club does against a very good Tampa team.

Winnipeg Free Press:  Lowry bags first NHL goal.  From the angle we had in the press box it sure looked like Frolik and even the players on the ice reacted as if it was his goal.  Lowry had a pretty good game and was made to wear the fighter helmet as Jets player of the game in his post-game chat with the media.

Winnipeg Sun:  Clitsome makes impact in return.  The coach said that he would have to play himself into the top 6 and he played a nice game when given the opportunity.

Winnipeg Sun:  Jets show they can handle adversity in victory over winless ‘Canes.  At this point you just take the two points, throw them in the bank and you reset your focus for a tough Tampa team that is here Friday night. 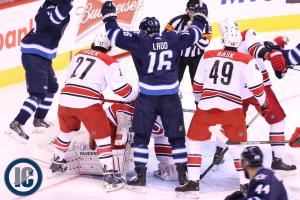 National Post:  Top prospects Connor McDavid, Jack Eichel making this a good year to be bad for NHL teams.  The Jets are one of the teams mentioned in the piece and that is not much of a surprise after their 1 win and 4 loss start to the season. (Note: The article was published before last night’s win).

Post-game podcast from the Press box: Host Michael Remis and analyst Richard Pollock breaks down the Jets play against the Hurricanes.