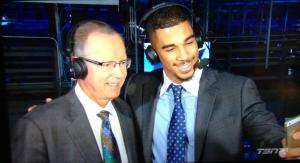 We are getting closer to the two week time frame that coach Maurice indicated would be when the Jets sniper was to be re-evaluated.

During the TSN broadcast, Evander Kane joined play-by-play voice of the Jets Dennis Beyak in the broadcast booth and after taking a selfie the two discussed the injury, the team and more.  Dennis asked Evander for an update on his rehab to which Kane replied “rehab is going really well.  Been working out with our strength and conditioning coach Craig and we are really happy with the way things have gone, so it’s really positive on that front.”

Dennis followed this up asking the Vancouver native if he had an idea when he may get back on the ice “I’m not too sure in terms of a timeline but like I said I think it has been pretty positive and I’m very happy with the way things have gone”.

So there you have it.  We should have a better idea later this week as to when Kane will be back on the ice and possibly how close he may be to returning to the Jets lineup.