Note:  Game 2 of the Young Stars for the Jets as they take on the Canucks Young Stars today at 4 pm.   The play-by-play can be heard on TSN 1290 Winnipeg.  You can also watch it via Winnipeg Jets.com.

Winnipeg Free Press:  Like a Rock.  A little defiance by the Jets GM on his chosen course of action.

Winnipeg Free Press:  Quiet centre makes some noise.  Lodge got noticed after Game 1 of the tournament.

Winnipeg Free Press:  Top pick Ehlers iffy for today’s game vs. Canucks.  Sounds like the Jets aren’t going to take any chances with their top selection this year.

The Score:  Three storylines to follow this season.  They see the three biggest stories as Kane, Pavelec and a tough central division.

The Score:  Offseason roundup.  A look at the moves (or lack thereof) made by the organization during the summer.  Also gives a season outlook projection. 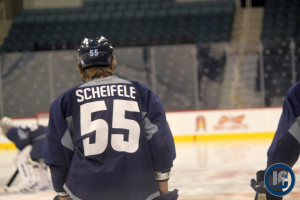