Note II:  The Jets Young Stars fell to the Flames Young Stars yesterday 6-4.  Lots of positive reviews on Jets 2014 1st round (9th overall) pick Nikolaj Ehlers who finished with a goal.  2013 3rd round (84th overall) selection Jimmy Lodge had a goal and an assist in the loss.  The Flames have a recap and video of the game in case you would like to get caught up.  Next on the schedule are the Vancouver Canucks Young Stars on Sunday at 4 pm.

Winnipeg Free Press:  Baby Jets done in by ‘D’.  Probably fair not to get too worried over one game.

Winnipeg Free Press:  Don’t dismiss D-man Nogier.  The Jets may have gotten lucky with this late pick after he fell in the draft due to his shoulder injury.

Winnipeg Free Press:  Jets prospects blow lead to lose 6-4 to Flames.  Despite a good start the young guns blew a two goal lead in Game 1 of the Tournament. 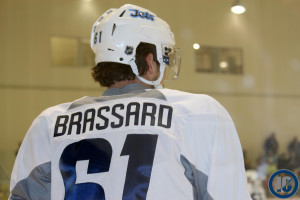 Calgary Sun:  Josh Morrissey hoping to land spot.  The Calgary native certainly had an impressive 2013-14 campaign and is looking to bring that success into the upcoming NHL season.