Note II:  The Jets Young Stars face the Flames Young Stars tonight at 6 pm cst in Penticton, B.C. in Game 1 of the Tournament.  The play-by-play can be heard on TSN 1290 Winnipeg.  You can also watch it via Winnipeg Jets.com or the Flames YouTube channel.

Winnipeg Free Press:  Might be time for Jets to incorporate some teenage talent.  While the idea of adding some flash to the lineup might be intriguing it is probably best to allow these young guys like Ehlers the opportunity to continue to develop in Junior instead of rushing them to the NHL.

Winnipeg Free Press:  Young Jets excited for tourney.  There is a lot of excitement in Jets nation as fans get a chance to follow the young prospects as they take on the Flames prospects in British Columbia today.

Winnipeg Sun:  Defensive minded Petan.  Defence is not the first word that comes to mind when you are thinking of the offensively gifted BC native but a well rounded game will likely endear him to his coaches as he advances in his hockey career. 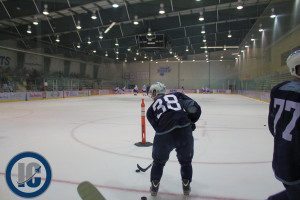 Winnipeg Sun:  Living the dream.  Having a number of prospects going all the way to the Finals of the AHL playoffs last season should serve this team very well in the future.

CBC:  Ehlers wants to crack Winnipeg Jets roster ASAP.  Lots of young guns champing at the bit for a chance to compete for an NHL roster spot with the Jets.  Will they likely stay in Junior or the AHL instead?  Perhaps but it is good for the organization to have these prospects pushing the players above them.

Illegal Curve:  IceCaps coach Keith McCambridge spoke to the media before leaving for BC  (audio).  What is his goal for a tournament like this? Has the quality of players gone up in the tournament? Value of getting players into game situations. What does he need to see from the prospects? Does he go in looking to elevate certain players? Are there players who help themselves with this tournament? What does he think of Josh Morrisey’s chances to make the jump to the NHL? July rookie camp lines continuing at this tournament? What he’s seen out of Nic Petan. Where does he see Adam Lowry’s progression? Does he see Lowry as a centre? Thoughts on Ehlers.

Illegal Curve:  Jets season tickets packages.  If you’d like to see what season ticket holders received in the mail here are the pictures.