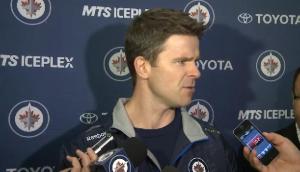 IceCaps coach Keith McCambridge spoke in advance of the team leaving for BC to play in the Young Stars tournament.

Coach McCambridge – What is his goal for a tournament like this? Has the quality of players gone up in the tournament? Value of getting players into game situations. What does he need to see from the prospects? Does he go in looking to elevate certain players? Are there players who help themselves with this tournament? What does he think of Josh Morrisey’s chances to make the jump to the NHL? July rookie camp lines continuing at this tournament? What he’s seen out of Nic Petan. Where does he see Adam Lowry’s progression? Does he see Lowry as a centre? Thoughts on Ehlers.