Note:  Game 3 of the Young Stars for the Jets as they take on the Oilers Young Stars today at 1:30 pm.   The play-by-play can be heard on TSN 1290 Winnipeg.  You can also watch it via Winnipeg Jets.com.

Winnipeg Free Press:  Maurice will push players to maximum.  This should be a very interesting training camp to say the least.  Expectations are high from this coach and it seems like the players have bought in.

Winnipeg Free Press:  Petan leads young Jets to OT win over Canucks.  They blew the lead but held on for their first win of the Tournament.  Final game is this afternoon against the Oilers prospects. 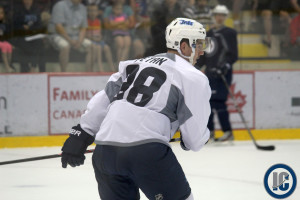 Winnipeg Sun:  Hockey a family affair for Jets prospect Comrie.  Having a couple of older brothers with NHL experience firing shots at you probably helps with your development as a goalie.

TSN:  Cheveldayoff knows playoff appearance is next step for Jets.  In conversation with hockey insider Bob McKenzie the Jets GM discussed expectations for his club.

TSN:  Jets season preview.  It was the Jets turn to have their team evaluated and there was quite a bit in this one including; a look back at last season, Scott Cullen’s analytics, key additions/subtractions, this is now, Sara Orlesky’s five key storylines, depth chart, Craig Button’s A & B Top 5 prospect list and a fantasy player to watch.