Jets winger is the First Star of the Week in the NHL. 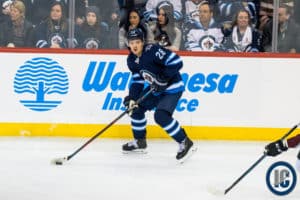 After scoring five goals and adding one assist in four games last week (including his first pro hat trick) Jack Roslovic was named as the NHL First Star of the Week.    He joins Patrik Laine (Nov 26th) and Mark Scheifele (Dec 3rd) as Jets players who have been named First Star of the Week this season.

Roslovic, 22, opened the week with a goal in Winnipeg’s 3-1 setback to Philadelphia on Monday. On Thursday, the Columbus, Ohio native scored again in the Jets’ 4-3 come from behind win over his hometown Blue Jackets. On Saturday, Roslovic recorded his first career hat trick and four-point (3G, 1A) game in Winnipeg’s 9-3 victory over the Anaheim Ducks. Roslovic’s trio of goals were all on the power play as he was the first Jets/Thrashers player to tally three PPGs in a game since Ilya Kovalachuk did it on Nov. 6/06. Roslovic led the NHL with five goals this week and was tied for the most points (6).