Note:  The Jets had a busy practice on Monday with most of the focus on their head coach who is set to coach in his 1500th regular season NHL game tonight.  Somewhat fitting that it will be opposite his good friend Peter DeBoer who is the bench boss in San Jose.  Morning skate gets underway at 10:30 am at Bell MTS Place so stay tuned to find out if Dustin Byfuglien is ready to return and who will be in net to face these Sharks via the pre-game report.  Puck drop is at 7 pm.

Note II: A second straight day of practice for the Moose at Van Andel Arena in Grand Rapids as they get set to conclude this road trip tomorrow night against the Griffins.  It won’t be an easy game as they take on the top team in the central division.

Winnipeg Sun:  Jets need to keep Sharks in check.  Paul’s big matchup is the Jets vs Evander Kane. His five keys to the game include: 1) Another 9 to shoot for. 2) Get 29 going. 3) Treat it like a playoff foe. 4) Forget about the Duck hunt. 5) Keep feeding the fourth.

Winnipeg Sun:  Kane, Sharks back for more.  I don’t think many folks here were giving the comments from last season much thought or even number 9 but I suspect with the resurrection of that talk we may get some descriptive chants from the Bell MTS Place crowd if the home side is up in the 3rd.

Winnipeg Free Press:  Lemieux finds home on Jets’ fourth line.  (Paywall).  Adding Andrew Copp as a centre has really been a nice piece of the puzzle for the fourth line for Winnipeg as has the contributions of Brendan Lemieux. 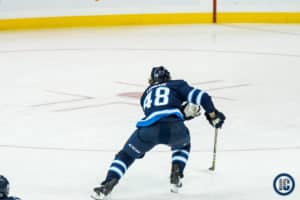 TSN:   First-round pick in play as Jets consider big-game hunting.   Frank has more on the Jets offering up this asset to add some depth to the current roster.

ESPN:  Midseason report cards on all 31 teams.  Bet they wish they could take back the part about Jack Roslovic.

Roslovic is playing his best hockey. Ken Wiebe of the Winnipeg Sun joined Andrew Paterson on the Afternoon Ride. They recapped Super Bowl LIII, discussed Jack Roslovic’s incredible week and what the Winnipeg Jets may do at the trade deadline.

On the 16th episode of Ground Control, Jamie Thomas, Mitchell Clinton and Tyler Esquivel chat about the success of the power play, Jack Roslovic’s play and more. Jamie also welcomes TSN personalty, Jay Onrait, to the pod to chat all things Winnipeg, scrum lurkers and so much more.