Another invitee for Development Camp. 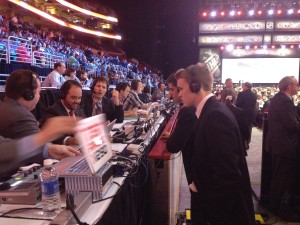 The Jets are holding their Development Camp starting on Monday, July 7th at the MTS IcePlex and not all the players attending are draft picks of the team.  Karson Kuhlman who went undrafted in last week’s Entry Draft has received an invitation to participate in the camp.

The Minnesota native has committed to University of Minnesota-Duluth for the 2014-15 season.  He spent last season with Dubuque Fighting Saints of the USHL.  He plays C/RW who finished with 25 goals, 19 assists for 44 points in 56 games.

Kuhlman is a fleet footed center who is at his best when he is playing a hard two-way game. He has the smarts to take away opposing chances with a hard backcheck and quickly start the transition. Not afraid to go to the net or work in the corners. Possesses a solid shot and good hands.