An update on the Jets injury situation. 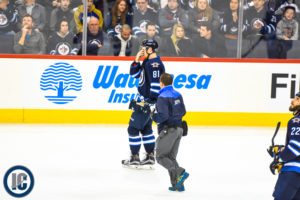 It seems like 24 hrs after I do a Monday Injury Update we end up with a Tuesday Injury Report and today proved no different.  This time we learned that Kyle Connor is going to be at least a week according to coach Maurice.

As illustrated yesterday he joins a long list in the Jets infirmary.  However that list may be getting smaller.  It appears that whatever was ailing Alexander Burmistrov wasn’t too significant as he was back on the ice for the Jets at morning skate and will play tonight against the Blackhawks.  As well Drew Stafford was on the ice wearing a yellow non-contact jersey.

According to coach Maurice via Ted Wyman of the Winnipeg Sun: “Little, Perreault and Stafford are expected to make the road trip with the #NHLJets this week. Connor is day to day and should travel too” but he also added this cautionary note “All three will make the trip with us but I don’t have a timeline on their return.”