Winnipeg Sun:  Patchwork Jets face toughest test yet in red-hot Hawks.  Five of the 12 forwards for Winnipeg have spent time with the Moose farm team as well as three of the six defenceman as the Jets seek to continue an improbable run despite all the injuries they are dealing with.

CBC:  Scheifele shining after a little help Hawerchuk.  The connection of the Jets 1.0 paid dividends for the 2.0 version when it comes to a former 1st overall pick in Hawerchuk helping out with the 7th overall pick in Scheifele.

AP:  Laine leads unprecedented generation of fantastic Finns.  Not solely about the Jets top pick in 2016 but he does garner some attention. 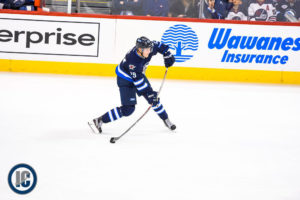 TSN:  Schefiele has yet to reach his ceiling.  No question that his trajectory continues to angle upwards which for a draft and development team like the Jets is certainly a must have for success.

Illegal Curve:  Jets Injury Report.  With so many injured players we are constantly receiving updates from the coaching staff on who is coming in and out of the lineup.  Here is all the latest.

Illegal Curve:  Coach Maurice pre-game scrum.  Is he impressed the way his team has responded considering they haven’t practice much over last three weeks?  Team playing well despite all the injuries.  On the Jets being modeled after the Blackhawks, has he seen that imprint six years later?  On Wheeler seeing the Hawks model in the Jets.  On Laine and what his ceiling may be.  Injury updates.