Post-game from the Jets dressing room as well as from coach Maurice. 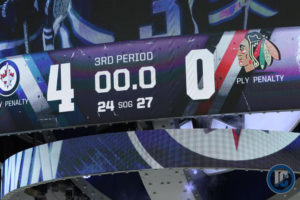 Well that was an improbable win over the top team in the Western Conference.  Who knew that the little engine that could Jets would knock off a powerhouse squad in Chicago 4-0 but that’s exactly what they did at the MTS Centre.  Despite a Hawks team that was 9-0-2 in their last 11 games, on the strength of Connor Hellebuyck’s 27 saves and a Josh Morrissey’s first ever NHL goal as well as Chris Thorburn and Nic Petan’s firsts of the season, the Jets rolled to victory.  Oh ya, Patrik Laine added his league leading 12th goal of the year as he continues to lead the entire NHL in goals.

Paul Maurice:  Was that a statement game and what does it say?  Josh Morrissey getting rewarded for his offensive game while still playing solid defensively.  What has he noticed about Hellebuyck during this higher workload?  What is the message for the group as they get ready to depart for the longest road trip of the season?  On Enstrom’s calm/stability in front of the net.  Was that the best Jets game of the year?  On Ehlers getting on track.  On being a team that knows how to win as a team.  Being able to win in a variety of differnt ways.

Coach Maurice on his message to his Jets team in advance of the longest road trip of the season: “Bring lots of underwear”.

Coach Maurice on whether that was best Jets game of the year: “Probably. (Pause). It probably was”.

Coach Maurice on getting contributions from everyone: “I think everyone on our bench feels they are important. They don’t go on the ice to hold water, to get through shift.”

Coach Maurice on Josh Morrissey’s hit on the Hawks Vinnie Hinostroza: “It was a really good hit”.