Note:  Not a bad mini home-stand as the Jets beat the Kings and Hawks during their two games back at the MTS Centre and in advance of the longest road trip of the season.  The team won’t practice today before departing for Philadelphia where they kick off this five game in 12 day road trip.

Note II:  Just about the time you may be reading this the Manitoba Moose will be getting ready for their third game of their five game road trip.  However this one is at the unconventional time of 12:30 pm CT (10:30 am PT) as they are in Bakersfield to take on the Condors.  The game will be broadcast on TSN 1290 Winnipeg or you can listen on the Manitoba Moose official site.

Winnipeg Sun:  Long road ahead for Jets.  That song “the road is long” popped into my head when I read the headline.  Ken outlines the path forward for Winnipeg.

Sportsnet:  30 Thoughts.  Just one Jets note and it is with respect to prospect Pavel Kraskovsky in thought 24.

Winnipeg Sun:  Jets blank Blackhawks 4-0.  Teddy hits the nail on the head with his opening line “This was the kind of victory that just might convince some people the Winnipeg Jets are for real”.  He breaks down the game in his column.

Winnipeg Sun:  Laine’s great scoring expectations spreading to rest of Jets.  The craziest part is he makes it look so routine.  It is supposed to be difficult to score in the NHL and he continues to make it look effortless. 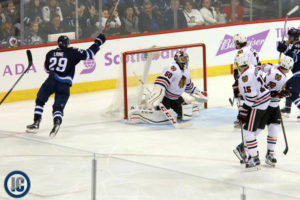 Winnipeg Free Press:  Determined Jets blank Blackhawks.  (Paywall).  Everyone who expected that game last night raise your hand?  While it was closer than the score indicated it was quite a 60 minute performance from this young Jets team who continues to surprise.

Winnipeg Free Press:  Jets building toward the Winnipeg Way.  (Paywall).  Guess there was a good reason Winnipeg was sold as the “Chicago of the North” in the late 1800s, early 1900s.

TSN:  Jets on TSN.  (Video).  Dennis Beyak and Shane Hnidy explain how the Jets big third period put the game out of reach for the Blackhawks as Winnipeg scored three unanswered goals.

TSN:  That’s Hockey 2 Nite.  (Video).  After an impressive win over the Blackhawks, Jamie McLennan says he doesn’t think the Jets are a playoff team this season, but explains why he thinks they will be a force to be reckoned with in a couple years.

CSN Chicago:  Five Things from Blackhawks-Jets.  Always interesting to read the perspective from a beat writer who covers the Jets opposition.

Chicago Sun-Times:  Jets chase Corey Crawford, end Blackhawks’ point streak at 11.  Pretty impressive to hand a regulation loss out to a team like that Hawks who hadn’t had one since October 21st.

Globalnews.ca:  Jets show they can hang with the big boys in win over the Hawks.  Especially when you’re getting contributions from the entire team.  Not to be lost in the Laine/Hellebuyck excitement is the fact that Petan/Thorburn scored their first goals of the season and Josh Morrissey got the first of his career (which turned out to be the game winner).

National Post:  Connor Hellebuyck posts third career shutout as Jets blank Blackhawks 4-0.  No bigger time than now when he has been given the opportunity to grab the bull by the horns than now to really seize the reins and become the #1 goalie for this young Jets squad. 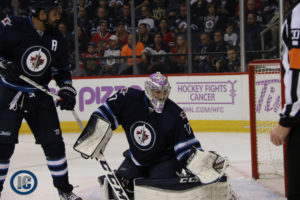 theScore:  How Hellebuyck is taking flight at just the right time for Jets.  No question the play of the young goalie has improved of late and helped to stabilize this critical position for Winnipeg.

CBC:  Scheifele shining after a little help Hawerchuk.  The connection of the Jets 1.0 paid dividends for the 2.0 version when it comes to a former 1st overall pick in Hawerchuk helping out with the 7th overall pick in Scheifele.

Illegal Curve: Jets Injury Report.  With so many injured players we are constantly receiving updates from the coaching staff on who is coming in and out of the lineup.  Here is all the latest.