A look at the game 18 projected lineups and listen to pre-game audio. 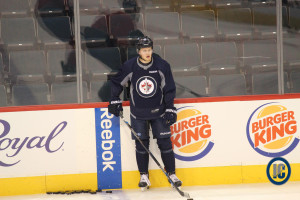 Via Brian Munz of TSN 1290 Winnipeg we get these as the Jets projected lines and D pairs:

Blake Wheeler:  On what to expect from the Blackhawks.  On the Jets making another call-up.  What does it say about the depth of the organization.  How have they been able to establish “their game” without practice?  Is he a standings guy this early in the season?

Mark Scheifele:  Has he had any other texts from NHL players to “slow down”?  How much does he keep an eye on the standings?  What does it say about the group that they keep rolling despite the injuries?  On what Marko Dano has done on his line?  Does his style make it easy to find chemistry with him?

Patrik Laine:  Does he keep an eye on having the scoring lead?  Does he take pride in what he has been able to do so far?  What does he know about the Blackhawks team?  Does he look forward to matching up against biggest stars in the game?  Did he have any doubt when the pucks weren’t going in for him during the pre-season?  What expectations come along with being such a high draft pick?  As a teenager has it been difficult to adjust to life in the NHL?  Was there a moment when he realized “hey I can play well in this league”?

Nic Petan:  What has been the key to the guys coming up from the Moose being able to help with the parent club?  On facing a team that is rolling like the Blackhawks.  More emphasis on protecting the puck?  What is he looking forward to in playing with Chase?  What was De Leo’s reaction to when he got called up?

Paul Maurice:  Is he impressed the way his team has responded considering they haven’t practice much over last three weeks?  Team playing well despite all the injuries.  On the Jets being modeled after the Blackhawks, has he seen that imprint six years later?  On Wheeler seeing the Hawks model in the Jets.  On Laine and what his ceiling may be.  Injury updates.

Via Chris Kuc of the Chicago Tribune here are the Hawks projected lines: