The Jets help in the fight against cancer in their game vs. Predators. 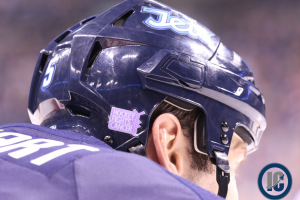 The Jets sent out this release for a promo for the game next Tuesday which will help raise funds in the fight against cancer:

On Tuesday November 4th, 2014 your Winnipeg Jets will host Hockey Fights Cancer Night when they take on the Nashville Predators at 7:00PM at MTS Centre.

In conjunction with CancerCare Manitoba, we are pleased to provide you with an opportunity to purchase tickets for this special evening. All monies raised through the Hockey Fights Cancer initiative will be donated to CancerCare Manitoba Foundation in support of CancerCare’s Pediatric Clinical Trials.

Simply click this link and enter the Promo Code HFC2014 to receive access to a limited number of tickets available through CancerCare Manitoba (while quantities last).

By using the Promo Code HFC2014, $10 per ticket purchased for November 4th, 2014 will be directed to support the Winnipeg Jets Hockey Fights Cancer initiative.

– All Winnipeg Jets players will wear special Hockey Fights Cancer jerseys during pre-game warm up which will be given out throughout the game. Fans can purchase a raffle ticket for $5.00 for a chance to win one of these Reebok issued Winnipeg Jets Jerseys.

– Winnipeg Jets General Manager Kevin Cheveldayoff will be joined at centre ice by four Pediatric CancerCare patients for a cheque presentation and honourary puck drop prior to the game.

– All rink-boards & visual media will be converted to lavender for the game in order to generate increased awareness for the cause.