Note:  The Jets are in the Big Apple to play their third of four on the road as they take on the Rangers tonight starting at 6 pm cst.  Be sure to stick with our comprehensive coverage throughout the day and following the game.  As always ensure you follow @illegalcurve on twitter.

Note II: If it’s Saturday, it’s the Illegal Curve Hockey Show on TSN 1290 Radio. Today’s show will air at the special time of 10:00 AM – 1:00 PM.  Join Drew, Richard and Ezra as they preview both the Jets-Rangers game, and Sunday’s Jets-Blackhawks game, while looking back at Thursday night’s Jets-Devils game. “Saturday Spotlight” will feature an interview with Doug Cifu, Co-Owner of the Florida Panthers.

Winnipeg Free Press:  Little known star.  It may be partly a result of personality as Little is not a “big personality” off the ice.  Soft spoken and usually good to chat with the media, he lets his play on the ice speak for itself.

Winnipeg Sun:  Only a matter of time before Jets stars start firing.  While they just weren’t able to fire on all cylinders on Thursday night the team looks like they are close to clicking on offense. 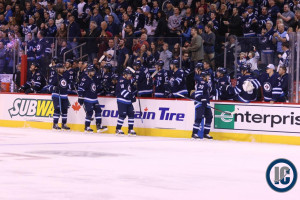 Yahoo Sports:  Buzzing the Net.  Looks like Jets 2013 1st round pick Josh Morrissey may be on the move from his Jr club as it appears a number of changes have either happened or will be happening in Prince Albert.

Illegal Curve:  Hockey Fights Cancer.  The Jets will be taking on the Predators next Tuesday night at the MTS Centre and it will be a night dedicated to raising money and awareness.

Nichols on Hockey:  Teams “circling” Jets for trades.  Elliotte Friedman was on Sportsnet 590 Friday morning and spoke about the interest teams have in some of the Winnipeg pieces that may become available.

TSN 1290 Winnipeg:  The Big Show (audio).  With another 1 goal loss, the Winnipeg Jets now find themselves 27th in the NHL averaging just 2 goals per game, however Dennis Beyak feels that the club’s offensive issues are just an early season mirage.

Jets official site:  Dustin Byfgulien mic’d up (video).  Dustin Byfuglien is loud and vocal while mic’d up during practice.

NY Daily News:  Rookie Kevin Hayes hopes to hold onto starter spot as Derek Stepan nears return.  Lots of pressure, even in that spot, on a team that was a Cup finalist last season.

Newsday:  Rangers might get Derek Stepan back on Monday.  Jets fans won’t have to worry about facing the no 1 Rangers centre but New York fans will be happy that they are getting him back.

NHL.com:  New season sees Rangers’ Nash an elite scorer again.  He has been lighting the lamp early on this season and has been a pleasant surprise for those who follow the Blueshirts.