Note:  The Jets are off today but return to action tomorrow in advance of their third road game against the New York Rangers at MSG.

Note II:  If it’s Saturday, it’s the Illegal Curve Hockey Show on TSN 1290 Radio. Saturday’s show will air at the special time of 10:00 AM – 1:00 PM. Join Drew, Richard and Ezra as they preview both the Jets-Rangers game, and Sunday’s Jets-Blackhawks game, while looking back at Thursday night’s Jets-Devils game. “Saturday Spotlight” will feature an interview with Doug Cifu, Co-Owner of the Florida Panthers.

Yahoo Sports:  Buzzing the Net.  Looks like Jets 2013 1st round pick Josh Morrissey may be on the move from his Jr club as it appears a number of changes have either happened or will be happening in Prince Albert.

Winnipeg Free Press:  Pavelec’s play getting raves.  He has been fairly solid.  Of course the Jets cannot seem to find the goal scoring when Pavelec is playing well enough to get them the victory. 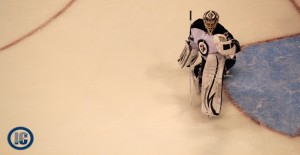 Winnipeg Free Press:  Jets snuffed in New Jersey.  It really was the Jets game to win.  While both teams had quality chances the team that left with one point probably deserved two.

Winnipeg Sun:  No treat for Jets on Devils’ night.  Going to a shootout against a Devils team that was 0 for their last 18 should have been pretty easy.  Ironically their last shootout win came against these very Jets back on March 10th, 2013 and wouldn’t you know it, they pulled off another shootout win last night.

TSN:  Strong showing for Kane in his return (video).  In his return from injury Evander Kane failed to get on the scoresheet, but as TH2N explains he was an impact player against the Jets.

TSN 1290 Winnipeg:  Lowry making an impact for Jets in rookie campaign.  Dennis writes about the 2011 3rd round pick and how he is becoming a relied upon player for coach Maurice.

Illegal Curve:  Coach Maurice post-game scrum.  A point lost or a point gained?  Play of Pavelec.  After a game like that is it good to have some time off?  Getting Kane back with Scheifele and Wheeler.  Giving and taking chances.  Three of four points to start road trip not bad?  On the pass by Enstrom to Wheeler.