Coach Maurice’s post practice comments from the University of Pennsylvania. 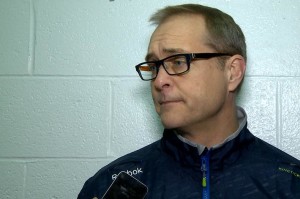 Coach Maurice – Status of Jacob Trouba?  How do you reflect on last night’s game?  Was it a discipline issue on the penalties?  Would he hear from the NHL on that play (too many Penguins) at end of the 2nd? What has made Chiarot such a good fit with Byfuglien?  Did he sit down with him (Chiarot) prior to the first game or since?  How does he see this match-up against Philadelphia?  What did he think of Evander Kane’s passing last night?  On where Chris Thorburn has taken his game.

On a lack of discipline:  “There have only really been two games where I felt like we took some undisciplined penalties”.