Note:  The Jets are in Philly tonight to take on a Flyers team coming off a 4-3 shootout win over Arizona on Tuesday.  The game kicks off at the Wells Fargo Center starting at 6 pm.  As always stick with @illegalcurve to get the latest Jets news.

Winnipeg Free Press:  Is it Hutch’s time?  Ed kicks off his article with a discussion being had around water coolers (is there any more important office feature in Winnipeg right now) all over the city as to which goalie the Jets should be riding.  He also writes about rethinking the trade deadline, squeaky-wheel theory, Big Buff and Ben.

Winnipeg Free Press:  Byfuglien and Trouba on maintenance days after loss to Penguins.  Coach Maurice is really implementing his rest between games as he tries to conserve player energy and allow them to recover from the bumps and bruises they accumulate during the season.

Winnipeg Sun:  Jets rookie blue-liner Ben Chiarot’s been on fire.  Consistent, reliable and not too flashy are all words that you could use to describe the game of the 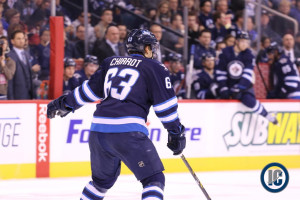 Illegal Curve:  Coach Paul Maurice scrum from University of Pennsylvania (audio).  Status of Jacob Trouba?  How do you reflect on last night’s game?  Was it a discipline issue on the penalties?  Would he hear from the NHL on that play (too many Penguins) at end of the 2nd? What has made Chiarot such a good fit with Byfuglien?  Did he sit down with him (Chiarot) prior to the first game or since?  How does he see this match-up against Philadelphia?  What did he think of Evander Kane’s passing last night?  On where Chris Thorburn has taken his game.

TSN 1050 Toronto:  TSN Drive (audio).  TSN Hockey Insider Bob McKenzie joins TSN Drive to give a preview of his upcoming draft special, chats about the depth the Jets have on defence, and discusses the potential for a Jets/Blackhawks playoff matchup.

TSN 1290 Winnipeg:  The Big Show (audio).  According to Paul Edmonds, the newly formed trio of Adam Lowry, Evander Kane, and Chris Thorburn were the best Jets on the ice in Winnipeg’s 5-3 loss to the Penguins. In particular, Edmonds says the once maligned Thorburn is making the Jets think twice about a trade to shore up the team’s forward depth.

Philadelphia Daily News:  Best chance for Flyer playoff run: a healthy Mason.  It will be quite the hill to climb, they are ten points back of Boston for 8th, if the Flyers want out of the bottom third of the Eastern Conference.